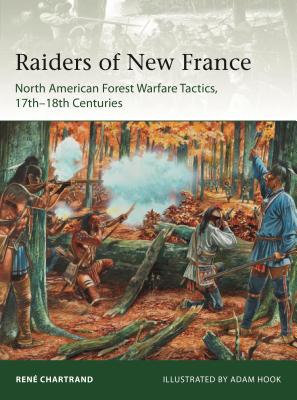 Supported by full-color illustrations, this study explores in startling new detail the “musket and tomahawk” forest warfare by which the French colonists and their allies battled to ensure the survival of “New France.”

Though the French and British colonies in North America began on a “level playing field," French political conservatism and limited investment allowed the British colonies to forge ahead, pushing into territories that the French had explored deeply but failed to exploit. The subsequent survival of “New France” can largely be attributed to an intelligent doctrine of raiding warfare developed by imaginative French officers through close contact with indigenous tribes and Canadian settlers. The groundbreaking new research explored in this study indicates that, far from the opportunism these raids seemed to represent, they were in fact the result of a deliberate plan to overcome numerical weakness by exploiting the potential of mixed parties of French soldiers, Canadian backwoodsmen, and allied indigenous warriors.

Supported by contemporary accounts from period documents and newly explored historical records, this study explores the “hit-and-run” raids which kept New Englanders tied to a defensive position and ensured the continued existence of the French colonies until their eventual cession in 1763.

Adam Hook studied graphic design, and began his work as an illustrator in 1983. He specializes in detailed historical reconstructions, and has illustrated Osprey titles on subjects as diverse as the Aztecs, the Ancient Greeks, Roman battle tactics, several 19th-century American subjects, the modern Chinese Army, and a number of books in the Fortress series. His work features in exhibitions and publications throughout the world.