The Battle of Hue 1968: Fight for the Imperial City (Campaign) (Paperback) 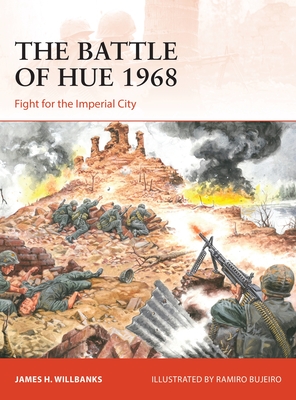 The Battle of Hue 1968: Fight for the Imperial City (Campaign) (Paperback)

In late January 1968, some 84,000 North Vietnamese and Viet Cong troops launched a country-wide general offensive in South Vietnam, mounting simultaneous assaults on 36 of 44 provincial capitals, and five of the six autonomous cities (including the capital city of Saigon). The longest and bloodiest battle occurred in Hue, the most venerated place in Vietnam. The bitter fighting that raged there for more than three weeks drew the attention of the world.

Hue was the ancient capital of Vietnam, and as such, had been previously avoided by both sides; it had not seen any serious fighting prior to 1968. All that changed on the night of January 31 that year when four North Vietnamese battalions and supporting Viet Cong units simultaneously attacked and occupied both parts of the city straddling the Perfume River. The Communist forces dug in and prepared to defend their hold on the city. US Marines and South Vietnamese soldiers were ordered to clear the city, supported by US Army artillery and troops. A brutal urban battle ensued as combat raged from house to house and door to door. It was a bloody fight and resulted in large-scale destruction of Hue. Eventually, the Marines and the South Vietnamese forces retook Hue, but it turned out to be one of the longest and bloodiest battles of the Tet Offensive, and led to a sea change in US policy in Vietnam.

Dr James H. Willbanks is a decorated Vietnam veteran and Professor Emeritus of Military History at the U.S. Army Command and General Staff College, Fort Leavenworth, Kansas. Dr Willbanks joined the CGSC faculty in 1992, when he retired from the Army as a lieutenant colonel with 23 years' service as an Infantry officer in various assignments in the United States and overseas, to include a tour as an infantry advisor with a South Vietnamese regiment during the 1972 North Vietnamese Easter Offensive. Prior to his retirement from Federal service in 2018, Dr Willbanks served as the General of the Army George C. Marshall Chair; prior to that, he served as the director of the CGSC Department of Military History. Dr Willbanks is the author or editor of 20 books, and his work has featured widely in the US and international media.

Ramiro Bujeiro has become a frequent and popular contributor to Osprey since illustrating Warrior 23:US Marine in Vietnam 1965–73
(1998). He is an experienced commercial artist who lives and works in his native city of Buenos Aires, Argentina. His professional background includes commissions as a figure illustrator and strip cartoonist for clients all over Europe, the Americas and in Great Britain. His main interests are the political and military history of Europe in the first half of the 20th century.