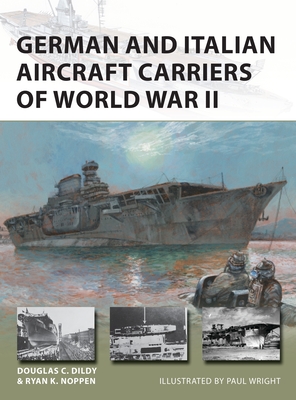 The history of Nazi Germany's attempt to build a modern aircraft carrier, and the other aviation ships that Germany and Italy designed or operated.

The quest for a modern aircraft carrier was the ultimate symbol of the Axis powers' challenge to Allied naval might, but fully-fledged carriers proved either too difficult, expensive, or politically unpopular for either to make operational. After the Anglo-German Naval Agreement of 1935, Hitler publicly stated his intention to build an aircraft carrier, the Graf Zeppelin, which was launched in 1938. A year later, the ambitious fleet-expansion Z-Plan, was unveiled with two additional aircraft carriers earmarked for production. However, by the beginning of World War II, Graf Zeppelin was not yet completed and work was halted. Further aircraft carrier designs and conversion projects such as the ocean liner Europa and heavy cruiser Seydlitz were considered but, in January 1943, all construction work on surface vessels ceased and naval resources were diverted to the U-boat Campaign.

This book explains not only the history of Germany's famous Graf Zeppelin fleet carrier and German carrier conversion projects but also Italy's belated attempt to convert two of her ocean liners into carriers. It considers the role of naval aviation in the two countries' rearmament programs, and describes how ultimately it was only Italian seaplane carriers and German ocean-going, catapult-equipped flying boat carriers that both Axis powers did eventually send into combat.

Ryan K. Noppen is a military author and consultant originally from Kalamazoo, Michigan and holds a Master of Arts degree in European History from Purdue University. He has worked as a naval and aviation subject matter expert on projects for the US Navy, taught college courses in military history, and has served as the headmaster of a Classical grammar school. A scholar of Dutch, German, and Central European military history, he has published a major history of Dutch air power and has written several titles for Osprey. He lives in California, USA.

Douglas C. Dildy is a retired US Air Force colonel who retired with approximately 3,200 hours of fast jet time. As commander of the 32d Fighter Squadron, he enforced the No-Fly-Zone over Iraq, making him an expert on F-15 employment. He is a USAF Academy graduate with a Masters Degree in Political Science and has authored numerous books, including To Defeat the Few for Osprey. He contributes regularly to the modelling magazine Small Air Forces Observer and lives in Albuquerque, New Mexico.

Paul Wright has painted ships of all kinds for most of his career, specializing in steel and steam warships from the late 19th century to the present day. Paul's art has illustrated the works of Patrick O'Brian, Dudley Pope and C.S. Forester amongst others, and hangs in many corporate and private collections all over the world. A Member of the Royal Society of Marine Artists, Paul lives and works in Surrey.
"Informative text coupled with archive images and some first class artwork by illustrator Paul Wright." - Robin Buckland, Military Model Scene