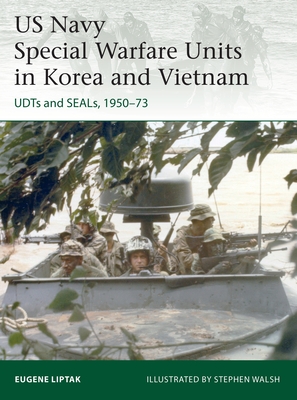 This fully illustrated study describes the vital combat roles of the US Special Warfare units, latterly including the renowned SEALs, during two of the deadliest conflicts of the Cold War.

During the Korean War and the Vietnam War, US Navy Special Warfare units played a variety of vital combat roles amid two of the deadliest conflicts of the Cold War. In Korea, underwater demolition teams (UDTs) surveyed beaches for amphibious operations, cleared sea mines from harbors, conducted seaborne raids against inshore targets, and served as scouts for the infiltration of Korean guerrillas and British Royal Marine Commando raids along the North Korean coast. In South Vietnam, UDTs surveyed beaches and demolished Viet Cong bunkers, supply caches, and river obstacles in the Mekong Delta. The SEALs (Sea Air Land teams) deployed entire platoons into the Mekong Delta and the Rung Sat Special Zone to conduct guerrilla warfare against the Viet Cong that included ambushes, reconnaissance, and capturing leaders and supply caches. In addition, the SEALs also played important roles in the Phoenix Program and in rescuing prisoners of war. Fully illustrated throughout, this study explores how the US Navy's specially trained naval commandos accomplished their missions in Korea and Vietnam.

STEPHEN WALSH studied art at the North East Wales Institute and has worked as a professional illustrator since 1988. Since then he has illustrated a variety of books and games including Settlers of Catan. His projects for Osprey include such diverse subjects as the battle of Otterburn, the Chinese army from 1937 to 1949, and the US Home Front in World War II.