At the Gates of Rome: The Fall of the Eternal City, AD 410 (Hardcover) 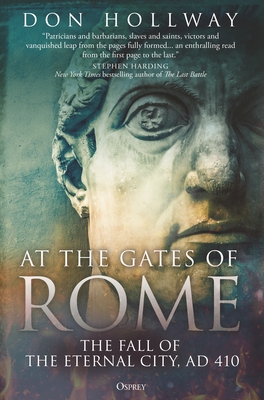 At the Gates of Rome: The Fall of the Eternal City, AD 410 (Hardcover)

A dramatic retelling of the story of the final years of the Western Roman Empire and the downfall of Rome itself from the perspective of the Roman general Stilicho and Alaric, king of the Visigoths.

It took little more than a single generation for the centuries-old Roman Empire to fall. In those critical decades, while Christians and pagans, legions and barbarians, generals and politicians squabbled over dwindling scraps of power, two men – former comrades on the battlefield – rose to prominence on opposite sides of the great game of empire. Roman general Flavius Stilicho, the man behind the Roman throne, dedicated himself to restoring imperial glory, only to find himself struggling for his life against political foes. Alaric, King of the Goths, desired to be a friend of Rome, was betrayed by it, and given no choice but to become its enemy. Battling each other to a standstill, these two warriors ultimately overcame their differences in order to save the empire from enemies on all sides. And when one of them fell, the other took such vengeance as had never been seen in history.

Don Hollway, author of The Last Viking, combines ancient chroniclers' accounts of Stilicho and Alaric into an unforgettable history of betrayal, politics, intrigue and war for the heart and soul of the Roman Empire.

Don Hollway is an author, illustrator, and historian. His first book, The Last Viking, is a gripping history of King Harald Hardrada which was acclaimed by bestselling author Stephen Harding and by Carl Gnam of Military Heritage magazine. He is also a classical rapier fencer and historical re-enactor. He has published articles in History Magazine, Military Heritage, Military History, Wild West, World War II, Muzzleloader, Renaissance Magazine and Scientific American. His work is also available at www.donhollway.com. He lives in Dallastown, PA.

“Don Hollway's At the Gates of Rome is a masterful blending of solid scholarship and excellent storytelling that brings the Eternal City's turbulent early history to vibrant life. Patricians and barbarians, slaves and saints, victors and vanquished leap from the pages fully formed, making the book an enthralling read from the first page to the last.” —Stephen Harding, 'New York Times' bestselling author of 'The Last Battle'

“Fans of Hollway's short work already know his outstanding narrative style is matched by his impressive range. Coming on the heels of his medieval masterpiece The Last Viking, At the Gates of Rome brings Hollway's marriage of thrilling storytelling and historical rigor to Late Antiquity. In this illuminating page-turner, Hollway walks us through the fate of one of the most significant civilizations in human history. There are works of history we return to as reference, and those we return to as inspiration. In At the Gates of Rome, Hollway has given us both.” —Myke Cole, author of 'Legion versus Phalanx'

“Skillfully weaving the accounts of ancient chroniclers into a compelling narrative, Hollway relates how these former comrades in arms became opposition leaders in the contest for empire…At the Gates of Rome is a solid work of scholarship as well as a good read.” —Justin D. Lyons, HistoryNet