On a Wing and a Prayer: One Woman's Adventure into the Heart of the Rainforest (Bloomsbury Nature Writing) (Hardcover) 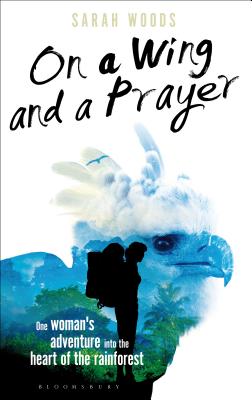 On a Wing and a Prayer: One Woman's Adventure into the Heart of the Rainforest (Bloomsbury Nature Writing) (Hardcover)

When writer and intrepid traveler Sarah Woods set about discovering the jungles of Central and South America, her quest took her into some of the most remote tangles of vine-knotted jungles on the planet. In Panama's rain-soaked Chiriquí highlands, she navigated seemingly impassable trails with a machete to reach quetzals with resplendent jewel-tone plumage.

Sarah sought the native wisdom of the indigenous Embera, deep in the Darien Jungle, in order to encounter the world's largest and most powerful birds of prey--the elusive harpy eagle. Using razor-sharp talons to hunt and kill sloths and monkeys with deadly precision, these mammoth, winged dinosaurs hide a lesser-known, softer side: devoting great care to raising their young for the first two years of their lives. Seldom seen in the wild, Sarah struggled to demystify the fear-riddled legends and superstitions that earned the harpy eagle its name from early explorers.

Her voyage taught her much about the rich glories and mesmerizing spectacle of the natural world and also its challenges and dangers. She met the albino 'moon children' of Kuna Yala, swam in the Panama Canal, encountered left-wing guerrillas at the heart of Colombia's five-decade conflict, and witnessed Amazonian beliefs and customs surrounding shape-shifting and the jungle afterlife. Sarah survived landslides, crash landings, mammoth floods, and culture clashes in mysterious untrodden lands, learning much about aspects of herself from the incredible wildlife and tribal peoples she encountered--arguably her biggest journey.

For two decades Sarah Woods has traveled nonstop, circumnavigating the globe in several directions and clocking up over six hundred thousand miles along the way. Now based in the UK again, Sarah is a regular travel expert/contributor to daytime TV and BBC radio, and she has written extensively for more than seventy magazines worldwide.

“Sarah Woods hacks deep into the rainforest in search of the rare harpy eagle and comes away with more: a greater insight into both the people and wildlife that exist in these tough environments, and herself too.” —Wanderlust

“I don't think I'll ever go to the jungles of South America – they seem hot, sweaty and full of biting things, but I was very glad to read this excellent account of people, places and wildlife, including, perhaps, a Harpy Eagle.” —Mark Avery, Sunday Book Review

"Even when the jungle was giving her rashes, parasites, or the runs, her catalogs of bird species read like descriptions of a feast." —Carrie Laben, 10,000 Birds

"If you have any interest at all in this region – how can you be a birder and not? – this is a worthwhile read.” —Birder's Library