Models of the Mind: How Physics, Engineering and Mathematics Have Shaped Our Understanding of the Brain (Hardcover) 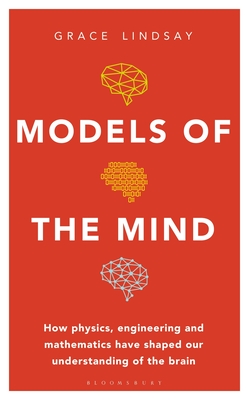 Models of the Mind: How Physics, Engineering and Mathematics Have Shaped Our Understanding of the Brain (Hardcover)

Grace Lindsay reveals the value of describing the machinery of neuroscience using the elegant language of mathematics.

The brain is made up of 85 billion neurons, which are connected by over 100 trillion synapses. For over a century, a diverse array of researchers have been trying to find a language that can be used to capture the essence of what these neurons do and how they communicate – and how those communications create thoughts, perceptions and actions. The language they were looking for was mathematics, and we would not be able to understand the brain as we do today without it.

In Models of the Mind, author and computational neuroscientist Grace Lindsay explains how mathematical models have allowed scientists to understand and describe many of the brain's processes, including decision-making, sensory processing, quantifying memory, and more. She introduces readers to the most important concepts in modern neuroscience, and highlights the tensions that arise when bringing the abstract world of mathematical modelling into contact with the messy details of biology.

Each chapter focuses on mathematical tools that have been applied in a particular area of neuroscience, progressing from the simplest building block of the brain – the individual neuron – through to circuits of interacting neurons, whole brain areas and even the behaviors that brains command. Throughout Grace will look at the history of the field, starting with experiments done on neurons in frog legs at the turn of the twentieth century and building to the large models of artificial neural networks that form the basis of modern artificial intelligence. She demonstrates the value of describing the machinery of neuroscience using the elegant language of mathematics, and reveals in full the remarkable fruits of this endeavor.

Grace Lindsay is a computational neuroscientist currently living in London. She completed her PhD at the Centre for Theoretical Neuroscience at Columbia University, where her research focused on building mathematical models of how the brain controls its own sensory processing. Before that, she earned a Bachelor's degree in Neuroscience from the University of Pittsburgh and received a research fellowship to study at the Bernstein Center for Computational Neuroscience in Freiburg, Germany. She was also awarded a Google PhD Fellowship in Computational Neuroscience in 2016, and has spoken at several international conferences. She is also the producer and co-host of Unsupervised Thinking, a podcast covering topics in neuroscience and artificial intelligence.

“Grace Lindsay provides a masterful tour of this important frontier, tackling intimidating topics with verve and wit.” —Sean Carroll, author of Something Deeply Hidden: Quantum Worlds and the Emergence of Spacetime

“ 'Enthralling, erudite and accessible … an engrossing history of science and an enlightening guide to neuroscience's current frontiers.'” —Liam Drew, Neurobiologist and author of I, Mammal: The Story of What Makes Us Mammals

“This book is an anthology of the scientific poetry that has illuminated our studies and conceptions of the brain.” —Professor Larry Abbott, Center for Theoretical Neuroscience, Columbia University