Retail Therapy: Why the Retail Industry is Broken – and What Can Be Done to Fix It (Paperback) 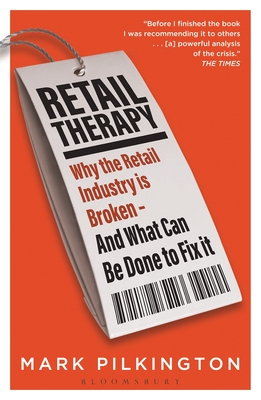 Retail Therapy: Why the Retail Industry is Broken – and What Can Be Done to Fix It (Paperback)

An insightful review of the collapse of the traditional retail sector in the West, and a roadmap for its potential recovery.

Almost weekly, the news is full of stories about disappearing retail chains--some of which have been around for decades. From Toys'R'Us, Aeropostale and A&P, recognized names are vanishing overnight--with the loss of hundreds of stores and thousands of jobs. As such large organizations disappear, so the malls, shopping centers, high streets and main streets become emptier and less appealing to visit.

Mark Pilkington argues that, while the decline in manufacturing receives more news attention, the retail sector is more important in terms of job numbers: in the US, it employs around 30 million people; in the UK, around 10 million (not just in selling, but in property, manufacturing, logistics and distribution as well). And as such, anything that jeopardises the retail sector will have a deep and lasting impact on millions of lives, as well as on public policy.

While many people will point a finger at the "Amazon effect," this is an oversimplification. Deeper forces are at work that are changing people's relationships with brands, the balance of power between producers and consumers, and the whole nature of the supply chain that has existed since the industrial revolution.

Retail Therapy offers a comprehensive analysis of these forces and their impact on the world of retailing. More importantly, it presents a cogent analysis of the longer term trends that are shaping retailing, and outlines a clear road map for sustainable success in the future.

Mark Pilkington is an experienced retailer and consultant, now based in the UK. After graduating from INSEAD, he joined Courtaulds, eventually becoming CEO of Gossard. While there, he coordinated the initial launch of the Wonderbra, with the associated media storm across Europe and North America. He has worked subsequently on joint ventures with M&S (splendour.com), and has consulted extensively in the Middle East in the lingerie and cosmetics areas. His current role is in consultancy for major retail groups on strategic developments in a rapidly-changing sector, with clients in Europe, the US, the Middle East and Asia.
“Retail Therapy bristles with alarming numbers. Before I finished the book I was recommending it to others, particularly because of his powerful analysis of the crisis. It is worth listening to the fixes – some of them controversial – he believes will cure the industry's ills.” —The Times