Driven: The Men Who Made Formula One (Paperback) 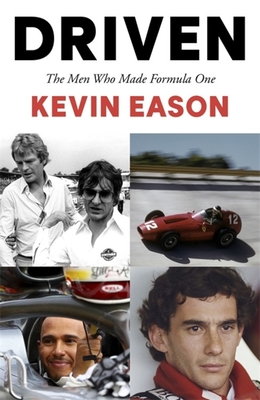 Driven: The Men Who Made Formula One (Paperback)

Formula One is speed, glamour, danger - and eye-watering wealth. Driven: The Men Who Made Formula One tells how a small group of extraordinary men transformed Formula One from a niche sport played out on primitive tracks surrounded by hay bales and grass verges into a £1 billion circus performing in vast theatres of entertainment all over the world.

Led by Bernie Ecclestone, the billionaire ringmaster, this clique started by scraping a living to go racing and ended up creating space-age cars, turning drivers from amateur gladiators into multimillion-pound superstars, like Ayrton Senna and Lewis Hamilton, while the names of Ferrari, McLaren and Williams are now as familiar around the world as Manchester United or Real Madrid.

For 20 years, Kevin Eason watched how these men operated like a sporting Mafia, protecting each other while squabbling over the vast wealth pouring into the sport. As motor racing correspondent for The Times and then with The Sunday Times, Eason was privileged to have a ringside seat as this cabal of wealthy characters ruled and then were pushed out of the sport they created.

This colourful and compelling account of the extraordinary flourishing of Formula One explores the quirks and extravagances of the men who converged - in one generation - to shape their sport; disparate characters with a common impulse: they were racers - and they were driven.

Kevin Eason has spent a lifetime in journalism, starting as an apprentice reporter in the North-East before moving to the Birmingham Post & Mail as chief industrial correspondent, and then to Fleet Street where joined the Today, before moving to The Times in 1989, covering a range of stories from general elections to disasters and working as motoring editor.

Eason moved to sport in 1998 as motor racing correspondent and has reported on almost 300 grands prix, as well as covering three Olympics, a soccer World Cup, Wimbledon, The Open, the Ryder Cup and many other big events. He was nominated UK Sports Journalist of the Year in 2012 for his reporting on the crisis at the Bahrain Grand Prix of that year, and received the Lorenza Bandini Gold Medal for his work in Formula One. He retired from The Times at the end of the 2016 season, but has subsequently worked for The Sunday Times.

Eason lives in Hertfordshire with his wife Jacqueline and Retriever Nell.

The book's many anecdotes make it fast-paced and difficult to put down.—Autosport

As a primer on how F1 got to the state it is in - and who got it there - you couldn't ask for much better. Driven tells you more about any of its subjects in a handful of pages then the last book I read on F1 managed in 300.—Racefans.net