Napoleon 1814: The Defence of France (Paperback) 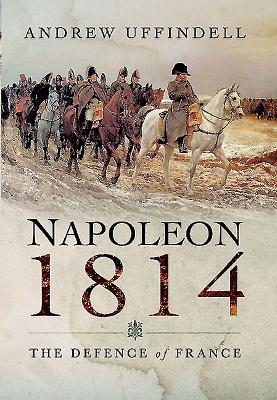 Napoleon 1814: The Defence of France (Paperback)


This title is likely unavailable. Email or call for price and availability.
In 1814, after two successive years of defeat in Russia and central Europe, Napoleon was faced with the ultimate disaster - an Allied invasion of France itself. The conduct of the intense, fast-moving campaign that followed has been widely hailed as one of his greatest feats as a commander, yet it has rarely been described fully and objectively. Andrew Uffindell, in this gripping and original study, reconstructs the campaign, reassesses Napoleon's military leadership and provides a masterly account of a campaign that helped shape modern Europe.Using numerous eyewitness accounts, Napoleon 1814 records the swift succession of clashes in graphic detail, leading up to the final battle outside Paris, the biggest and bloodiest of the entire campaign, and then the extraordinary drama of Napoleon's abdication. It shows for the first time how the course of the campaign was repeatedly determined by the weather and the terrain. The author also covers events off the battlefield, and examines a strangely neglected aspect of the campaign: the devastating impact on the civilian population. He provides a vivid and moving portrayal of a society traumatized by the brutal experience of war, as ordinary people struggled to survive and confront the moral dilemmas posed by enemy occupation.