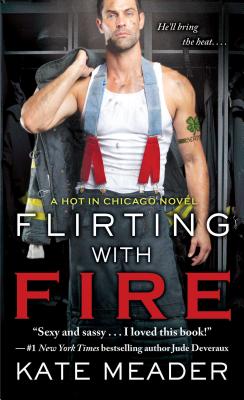 The first installment in Hot in Chicago, a brand-new, sizzling series from Kate Meader that follows a group of firefighting foster siblings and their blazing hot love interests!

Savvy PR guru Kinsey Taylor has always defined herself by her career, not her gender. That is, until she moved from San Francisco to Chicago to be with her fiancé who thought she wasn’t taking her “job” of supporting him in his high-powered career seriously enough—and promptly dumped her for a more supportive and “feminine” nurse. Now, as the new assistant press secretary to Chicago’s dynamic mayor, she’s determined to keep her eye on the prize: no time to feel inferior because she’s a strong, kick-ass woman, and certainly no time for men.

But that all changes when she meets Luke Almeida, a firefighter as searingly sexy as he is quick-tempered. He’s also the second oldest of the Firefightin’ Dempseys, a family of foster siblings who have committed their lives to the service—if Luke’s antics don’t get him fired first. When Luke goes one step too far and gets into a bar brawl with the Chicago Police Department, Kinsey marches into Luke’s firehouse and lays down the law on orders from the mayor. But at Engine Co. 6, Luke Almeida is the law. And he’s not about to let Kinsey make the rules.
Originally from Ireland, Kate Meader cut her romance reader teeth on Maeve Binchy and Jilly Cooper novels, with some Harlequins thrown in for variety. Give her tales about brooding mill owners, oversexed equestrians, and men who can rock an apron, a fire hose, or a hockey stick, and she's there. Now based in Chicago, she writes sexy contemporary romance with alpha heroes and strong heroines (and heroes) who can match their men quip for quip. Visit her at KateMeader.com.
"Sexy and sassy . . . I love this book!"
— #1 New York Times bestselling author Jude Deveraux

"Nobody does sexual tension like Kate Meader—Kinsey and Luke set the pages on fire."
— USA Today bestselling author Lauren Layne

"…everything you want in a romance: excellent writing, strong characters and a sizzling plot…"
— RT Book Reviews, Top Pick