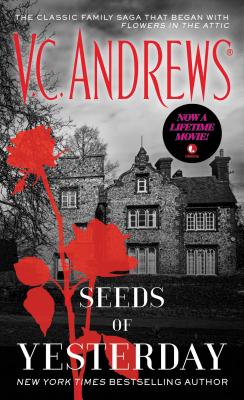 This is book number 4 in the Dollanganger series.

Now a major Lifetime movie event—Book Four of the Dollanganger series that began with Flowers in the Attic—the novel of forbidden love that captured the world’s imagination and earned V.C. Andrews a fiercely devoted fanbase.

They escaped their mother’s hellish trap years ago, but a cruel history of lies and deceit has come full circle…

The forbidden love that blossomed when Cathy and Christopher were held captive in Foxworth Hall is one the Dollanganger family’s darkest secrets. Now, with three grown children and even a new last name, the pair seem to have outlived a twisted legacy. But on their son Bart’s twenty-fifth birthday, when the spiteful and disturbed young man claims his rightful inheritance, the full, shattering truth of their tainted past will be revealed at Foxworth Hall—the place where the nightmare began, and where Christopher and Cathy were once just innocent flowers in the attic…

One of the most popular authors of all time, V.C. Andrews® has been a bestselling phenomenon since the publication of Flowers in the Attic, first in the renowned Dollanganger family series, which includes Petals on the Wind, If There Be Thorns, Seeds of Yesterday, and Garden of Shadows. The family saga continues with Christopher’s Diary: Secrets of Foxworth, Christopher’s Diary: Echoes of Dollanganger, and Secret Brother, as well as Beneath the Attic, Out of the Attic, and Shadows of Foxworth as part of the fortieth anniversary celebration. There are more than ninety V.C. Andrews novels, which have sold over 107 million copies worldwide and have been translated into twenty-five foreign languages.  Join the conversation about the world of V.C. Andrews at Facebook.com/OfficialVCAndrews.