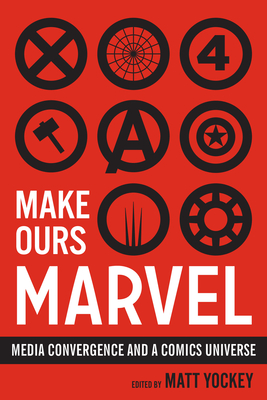 The creation of the Fantastic Four effectively launched the Marvel Comics brand in 1961. Within ten years, the introduction (or reintroduction) of characters such as Spider-Man, the Hulk, Iron Man, Captain America, and the X-Men catapulted Marvel past its primary rival, DC Comics, for domination of the comic book market. Since the 2000s, the company’s iconic characters have leaped from page to screens with the creation of the Marvel Cinematic Universe, which includes everything from live-action film franchises of Iron Man and the Avengers to television and streaming media, including the critically acclaimed Netflix series Daredevil and Jessica Jones. Marvel, now owned by Disney, has clearly found the key to transmedia success.

Make Ours Marvel traces the rise of the Marvel brand and its transformation into a transmedia empire over the past fifty years. A dozen original essays range across topics such as how Marvel expanded the notion of an all-star team book with The Avengers, which provided a roadmap for the later films, to the company’s attempts to create lasting female characters and readerships, to its regular endeavors to reinvigorate its brand while still maintaining the stability that fans crave. Demonstrating that the secret to Marvel’s success comes from adeptly crossing media boundaries while inviting its audience to participate in creating Marvel’s narrative universe, this book shows why the company and its characters will continue to influence storytelling and transmedia empire building for the foreseeable future.

Matt Yockey is an associate professor of film and media studies at the University of Toledo. He is the author of Batman, a volume in the TV Milestones Series.
Well-written. . . .[A]nd packed with information about the workings of the Marvel Universe. There is much to ponder and learn here.
— Choice

Make Ours Marvel is a well-timed anthology that fairly and critically examines Marvel’s long history as one of the great myth-makers of the twentieth and twenty-first centuries.
— Studies in Twentieth and Twenty-first Century Literature