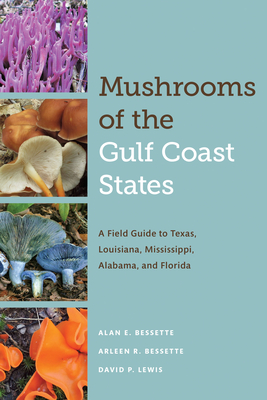 The weather patterns and topography of America's Gulf Coast create favorable growing conditions for thousands of species of mushrooms, but the complete region has generally gone uncharted when it comes to mycology. Mushrooms of the Gulf Coast States at last delivers an in-depth, high-quality, user-friendly field guide, featuring more than 1,000 common and lesser-known species—some of which are being illustrated in color for the first time.

Using easily identifiable characteristics and a color key, the authors enable anyone, whether amateur mushroom hunter or professional mycologist, to discern and learn about the numerous species of mushrooms encountered in Texas, Louisiana, Mississippi, Alabama, and Florida. Wild-food enthusiasts will appreciate the information on edibility or toxicity that accompanies each description, and they will also find the book’s detailed instructions for collecting, cleaning, testing, preserving, and cooking wild mushrooms to be of great interest. Providing encyclopedic knowledge in a handy format that fits in a backpack, Mushrooms of the Gulf Coast States is a must-have for any mushroom lover.

Alan E. Bessette is a distinguished emeritus professor of biology at Utica College of Syracuse University. A professional mycologist, he has authored or coauthored more than twenty-five books, including Edible Wild Mushrooms of North America.

Arleen Bessette is a mycologist and botanical photographer, winning multiple awards in the North American Mycological Association’s photography competition. She has authored or coauthored eighteen books, including Mushrooms of the Southeastern United States.

A retired chemist, David P. Lewis is currently a research associate with the Field Museum of Natural History in Chicago and has served as president of the Gulf States Mycological Society since 1998. In his mycological papers, Lewis has described many species new to science, several of which have been named for him.

A must-have for any mushroom hunter in Texas, Louisiana, Mississippi, Alabama, or Florida…this book is unique in its circumscribed geographic coverage and its inclusion of 1000-plus species…The expert authors collaborated with a large number of mushroom enthusiasts to compile this user-friendly guide.
— CHOICE

[Mushrooms of the Gulf Coast States] is a very valuable contribution to our knowledge of mushrooms from a region of the USA that has previously been largely ignored.
— Journal of the Botanical Research Institute of Texas

As with all books published in recent years by the Bessettes and their collaborators, [Mushrooms of the Gulf Coast States] has wonderful photos. The Bessettes have done a tremendous job of capturing the beauty and diversity of the Gulf Coast macrofungi with a wide array of high-quality pictures that typically show each mushroom from several angles. Most importantly, this book compiles the descriptions of most of the common fungi in my region in one place for the first time.…I highly recommend Mushrooms of the Gulf Coast States to any mycologist or mycophile who plans to travel to the Gulf Coast region and wants a guidebook to help them to enjoy our local fungi.
— Inoculum