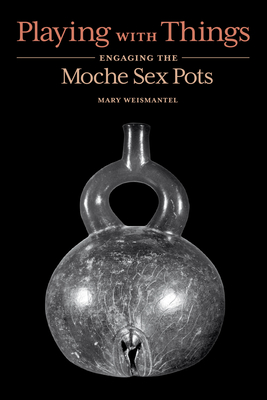 More than a thousand years ago on the north coast of Peru, Indigenous Moche artists created a large and significant corpus of sexually explicit ceramic works of art. They depicted a diversity of sex organs and sex acts, and an array of solitary and interconnected human and nonhuman bodies. To the modern eye, these Moche “sex pots,” as Mary Weismantel calls them, are lively and provocative but also enigmatic creations whose import to their original owners seems impossible to grasp.

In Playing with Things, Weismantel shows that there is much to be learned from these ancient artifacts, not merely as inert objects from a long-dead past but as vibrant Indigenous things, alive in their own inhuman temporality. From a new materialist perspective, she fills the gaps left by other analyses of the sex pots in pre-Columbian studies, where sexuality remains marginalized, and in sexuality studies, where non-Western art is largely absent. Taking a decolonial approach toward an archaeology of sexuality and breaking with long-dominant iconographic traditions, this book explores how the pots "play jokes," "make babies," "give power," and "hold water,” considering the sex pots as actual ceramic bodies that interact with fleshly bodies, now and in the ancient past. A beautifully written study that will be welcomed by students as well as specialists, Playing with Things is a model for archaeological and art historical engagement with the liberating power of queer theory and Indigenous studies.

Mary Weismantel is a professor of anthropology at Northwestern University, where she has previously served as director of the Gender and Sexuality Studies Program and as an adjunct curator at the Field Museum of Natural History. She received a PhD in anthropology from the University of Illinois at Urbana-Champaign and is the author of two books of ethnographic research in South America, Cholas and Pishtacos: Tales of Race and Sex in the Andes and Food, Gender and Poverty in the Ecuadorian Andes.