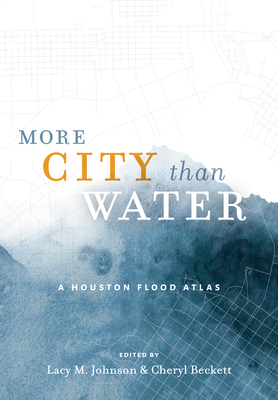 Shortly after Hurricane Harvey dumped a record 61 inches of rain on Houston in 2017, celebrated writer and Bayou City resident Lacy M. Johnson began collecting flood stories. Although these stories attested to the infinite variety of experience in America’s most diverse city, they also pointed to a consistent question: What does catastrophic flooding reveal about this city, and what does it obscure?

More City than Water brings together essays, conversations, and personal narratives from climate scientists, marine ecologists, housing activists, urban planners, artists, poets, and historians as they reflect on the human geography of a region increasingly defined by flooding. Both a literary and a cartographic anthology, More City than Water features striking maps of Houston’s floodplains, waterways, drainage systems, reservoirs, and inundated neighborhoods. Designed by University of Houston seniors from the Graphic Design program, each map, imaginative and precise, shifts our understanding of the flooding, the public’s relationship to it, and the fraught reality of rebuilding. Evocative and unique, this is an atlas that uncovers the changing nature of living where the waters rise.

Lacy M. Johnson is the author of the essay collection The Reckonings and the memoirs The Other Side and Trespasses. Her writing has appeared in The Best American Essays, The Best American Travel Writing, the New Yorker, and elsewhere. She teaches creative nonfiction at Rice University and is the founding director of the Houston Flood Museum.

Cheryl Beckett is an associate professor and area coordinator at the Kathryn G. McGovern College of the Arts, University of Houston School of Art, Graphic Design Program. Beckett has served as the creative director at Minor Design in Houston since 1987.

Houston is the problem and the solution, the dream and the nightmare, the big blue bubble in a still-red state, a global capital for oil production and the most diverse city in the country, a place menaced by future climate catastrophes and the soup bowl into which it already rained sixty-one inches in one storm: 2017’s Hurricane Harvey, which is the particular focus here. Nothing less than this brilliant chorus of writers and mapmakers could capture all that range and contradiction; gathered here, they tell of land and water,  inequality and solidarity, possibility and threat. “Hurricane Harvey reinforced my belief in the power of water,” writes marine biologist and native Houstonian Elaine Shen in one of the book’s riveting essays, and More City Than Water reinforces my belief in the power of creative atlases.
— Rebecca Solnit

I was gripped by More City Than Water from start to finish. If you didn't know how the historic flows of water, wealth, and power have shaped Houston and cities like it around the nation, the maps and narratives here can be your guide. And the book is an affirmation for those who have never been able to ignore the toxic seep industrial capitalism leaves some communities to drown in. It's not an easy book to read, but these pages are as insistent and inescapable as water pouring into the bayou. The words and images in More City Than Water insist on nothing but the truth.
— Camille T. Dungy

This kaleidoscopic essay collection paints an intimate portrait of Houston, Texas, through multiple, and at times divergent, lenses. Houston is ground zero for three of the twenty-first century's defining phenomena––urban development, extraction, and climate change––and as such it has the power to teach us about how people and communities evolve even as the place that unites them changes irrevocably.
— Elizabeth Rush

[A] strong anthology...the variety of voices and formats gives the work a sense of breadth. It adds up to a tough, thought-provoking depiction of the wreckage wrought by a changing climate.
— Publishers Weekly

[More City Than Water] is beautiful, moving, and, most fundamentally, provocative—a collective portrait of a city defined for good and ill by its relationship to water.
— Alta Journal

More City Than Water should serve as an inspiration for scholars working in the fields of digital and environmental humanities...This book points the way toward imagining 'environmental citizenship' as an essential practice in communities around the world.
— Frugal Chariot