In Darfur: An Account of the Sultanate and Its People (Library of Arabic Literature #70) (Paperback) 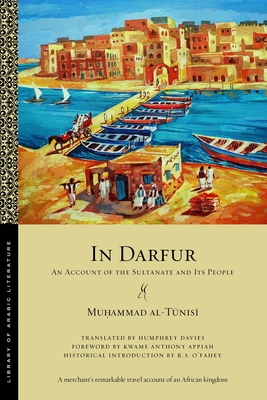 In Darfur: An Account of the Sultanate and Its People (Library of Arabic Literature #70) (Paperback)

This is book number 70 in the Library of Arabic Literature series.

A merchant's remarkable travel account of an African kingdom

Muḥammad al-Tūnisī (d. 1274/1857) belonged to a family of Tunisian merchants trading with Egypt and what is now Sudan. Al-Tūnisī was raised in Cairo and a graduate of al-Azhar. In 1803, at the age of fourteen, al-Tūnisī set off for the Sultanate of Darfur, where his father had decamped ten years earlier. He followed the Forty Days Road, was reunited with his father, and eventually took over the management of the considerable estates granted to his father by the sultan of Darfur. In Darfur is al-Tūnisī's remarkable account of his ten-year sojourn in this independent state, featuring descriptions of the geography of the region, the customs of Darfur's petty kings, court life and the clothing of its rulers, marriage customs, eunuchs, illnesses, food, hunting, animals, currencies, plants, magic, divination, and dances. In Darfur combines literature, history, ethnography, linguistics, and travel adventure, and most unusually for its time, includes fifty-two illustrations, all drawn by the author. In Darfur is a rare example of an Arab description of an African society on the eve of Western colonization and vividly evokes a world in which travel was untrammeled by bureaucracy, borders were fluid, and startling coincidences appear almost mundane. An English-only edition.
Muḥammad al-Tūnisī (Author) Muḥammad al-Tūnisī (d. 1274/1857) belonged to a family of Tunisian merchants who traded with Egypt and what is now Sudan. Raised in Cairo, al-Tūnisī spent ten years traveling through the Darfur Sultanate. On his return to Egypt, he played an important part in Muḥammad ʿAlī's modernization project, supervising the translation of veterinary and medical texts and editing the first printed editions of classical Arabic texts. Kwame Anthony Appiah (Foreword by) Kwame Anthony Appiah, who has been president of the PEN American Center, is the author of The Ethics of Identity, Thinking It Through: An Introduction to Contemporary Philosophy, The Honor Code, and the prize-winning Cosmopolitanism. Raised in Ghana and educated in England, he has taught philosophy on three continents and is currently Professor of Philosophy and Law at New York University. Professor Appiah writes the "Ethicist" column in the New York Times Magazine. Humphrey Davies (Translator) Humphrey Davies is an award-winning translator of some twenty-five works of modern Arabic literature, among them Alaa Al-Aswany's The Yacoubian Building, five novels by Elias Khoury, including Gate of the Sun, and Aḥmad Fāris al-Shidyāq's Leg over Leg. He has also made a critical edition, translation, and lexicon of the Ottoman-period Brains Confounded by the Ode of Abū Shādūf Expounded by Yūsuf al-Shirbīnī, as well as editions and translations of al-Tūnisī's In Darfur and al-Sanhūrī's Risible Rhymes from the same era. In addition, he has compiled with Madiha Doss an anthology in Arabic entitled Al-ʿāmmiyyah al-miṣriyyah al-maktūbah: mukhtārāt min 1400 ilā 2009 (Egyptian Colloquial Writing: selections from 1400 to 2009) and co-authored, with Lesley Lababidi, A Field Guide to the Street Names of Central Cairo. He read Arabic at the University of Cambridge, received his Ph.D. from the University of California at Berkeley, and previous to undertaking his first translation in 2003, worked for social development and research organizations in Egypt, Tunisia, Palestine, and Sudan. He is affiliated with the American University in Cairo.