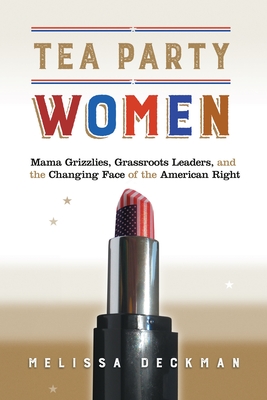 Examines the significant role of women in the conservative movement

Notable for its radical conservative views, the Tea Party is progressive in one way that much of mainstream US politics is not: it has among its most vocal members not spokesmen but spokeswomen. Michelle Bachmann, Sarah Palin, Governor Nikki Haley, US Representative Cathy McMorris Rodgers, and many others are all prominent figureheads for the fiery and prominent political movement. Many major Tea Party organizations, such as the Tea Party Patriots, are led by women and women have been instrumental in founding new right wing organizations for women, such as Smart Girl Politics, with ties to the movement. In Tea Party Women, Melissa Deckman explores the role of women in creating and leading the movement and the greater significance of women's involvement in the Tea Party for our understanding of female political leadership and the future of women in the American Right. Through national-level public opinion data, observation at Tea Party rallies, and interviews with female Tea Party leaders, Deckman demonstrates that many Tea Party women find the grassroots, decentralized nature of the movement to be more inclusive for them than mainstream Republican politics. She lays out the ways in which these women gain traction by recasting conservative political issues such as the deficit and gun control as issues affecting families, and how they rely on traditional gender roles as mothers and homemakers to underscore their particular expertise in understanding these issues. Furthermore, she examines how many Tea Party women claim to write off traditional feminist issues like reproductive rights and gender discrimination as distracting from the real issues affecting women, such as economic policies, and how some even reclaim the mantel of 'feminism' as signifying freedom and independence from government overreach--tactics that have over time been adopted by mainstream Republicans. Whether the Tea Party terrifies or fascinates you, Tea Party Women provides a behind-the-scenes look at the women behind an enduring and influential faction in American politics.
Melissa Deckman is the Louis L. Goldstein Professor of Public Affairs at Washington College, where she also chairs the Political Science Department. An expert on gender, religion, and American politics, she is the author or co-author of four books, including Tea Party Women and School Board Battles: The Christian Right in Local Politics, winner of the 2007 Hubert MorkenAward for the best book on Religion & Politics from the American Political Science Association. She chairs the board of the Public Religion Research Institute and her political commentary has appeared in The Washington Post, Huffington Post, and the Brookings Institution's FixGov blog.