Mission to the Volga (Library of Arabic Literature #28) (Paperback) 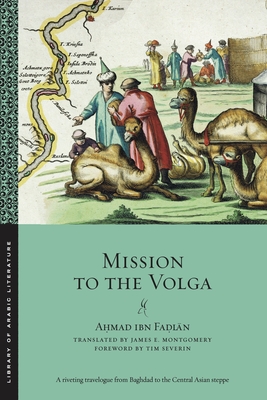 Mission to the Volga (Library of Arabic Literature #28) (Paperback)

Mission to the Volga is a pioneering text of peerless historical and literary value. In its pages, we move north on a diplomatic mission from Baghdad to the upper reaches of the Volga River in what is now central Russia. In this colorful documentary from the tenth century, the enigmatic Ibn Fadlan relates his experiences as part of an embassy sent by Caliph al-Muqtadir to deliver political and religious instruction to the recently-converted King of the Bulghars. During eleven months of grueling travel, Ibn Fadlan records the marvels he witnesses on his journey, including an aurora borealis and the white nights of the North. Crucially, he offers a description of the Viking Rus, including their customs, clothing, body painting, and a striking account of a ship funeral. Together, these anecdotes illuminate a vibrant world of diversity during the heyday of the Abbasid Empire, narrated with as much curiosity and zeal as they were perceived by its observant beholder. An English-only edition.
Ahmad Ibn Fadlan (Author) Aḥmad ibn Faḍlān was a member of a diplomatic mission sent by the Abbasid caliph al-Muqtadir in 309-310/921-922 to the king of the Volga Bulghars. His is the only existing record of that mission. Tim Severin (Foreword by) Tim Severin is a British explorer, film-maker, and lecturer. He received the Thomas Cook Travel Book Award for his 1982 non-fiction book The Sindbad Voyage and is noted for his Viking historical fiction series (2005). James E. Montgomery (Translator) James E. Montgomery, author of Al-Jāḥiẓ: In Praise of Books, is Sir Thomas Adams's Professor of Arabic at the University of Cambridge and Fellow of Trinity Hall. His latest publications are Loss Sings, a collaboration with the celebrated Scottish artist Alison Watt, and Dīwān ʿAntarah ibn Shaddād: A Literary-Historical Study.