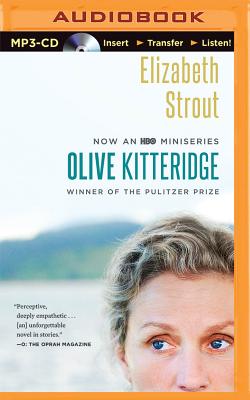 “The book discussion we had about Elizabeth Strout's Pulitzer Prize-winning novel about Olive Kitteridge, a retired schoolteacher in a little town in Maine, was one of the best we ever had. The reading group members were incredibly passionate about their love of the book and their love (and hatred) of Olive. We laughed and cried, and one member called us afterward and asked what we were going to read to get us that riled up again!”
— Deb McDonald, Garden District Book Shop, New Orleans, LA


At the edge of the continent, Crosby, Maine, may seem like nowhere, but seen through this brilliant writer's eyes, it's in essence the whole world, and the lives that are lived there are filled with all of the grand human drama--desire, despair, jealousy, hope, and love.

At times stern, at other times patient, at times perceptive, at other times in sad denial, Olive Kitteridge, a retired schoolteacher, deplores the changes in her little town and in the world at large, but she doesn't always recognize the changes in those around her: a lounge musician haunted by a past romance; a former student who has lost the will to live; Olive's own adult child, who feels tyrannized by her irrational sensitivities; and her husband, Henry, who finds his loyalty to his marriage both a blessing and a curse.

As the townspeople grapple with their problems, mild and dire, Olive is brought to a deeper understanding of herself and her life--sometimes painfully, but always with ruthless honesty. Olive Kitteridge offers profound insights into the human condition--its conflicts, its tragedies and joys, and the endurance it requires.