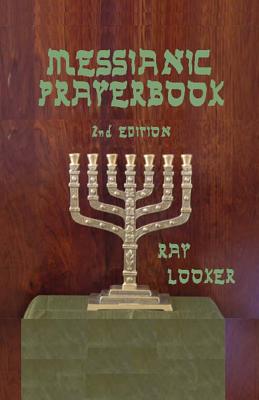 
Available in Warehouse. Wait for Email Confirmation for ETA
This book cannot be returned, cancelled, or exchanged. Please call for availability and pricing
This Second Edition of the Messianic Prayer Book has been greatly expanded in breath and scope. The inclusion of transliterated Hebrew Blessings is designed to allow the reader to learn to pray the blessings in the Hebrew language. The major emphasis of the Prayer Book is on family worship and the teaching of obedience to the Word of Yahweh to the next generation. The entire construct lends itself to increased family interaction, and quality time spent together in worship to Yahweh.
Ray Looker is a disciple of Yahshua the Messiah, an apostle of the Messianic Jewish faith and has been a Professor of Theology. Ray is committed to preparing the Church for the coming of the Messiah. Ray spent 14 years in the U.S. Army as a Senior-Ranking Non-Commissioned Officer. His military assignments took him to Greenland, Germany, Norway and Vietnam. He served in seven major campaigns in Vietnam, and has spent over 30 years as a Missionary and Professor in Europe, China and the inner-cities of America. With graduate degrees in Law, Ray worked as a Law Clerk in a Public Defender's Office and with a District Court Judge while doing post-graduate work for a Doctor of Theology Degree. His post-Doctorate research in Educational and Motivational Psychology allowed him to be a Program Manager in an epidemiological study of mental illness for the Department of Health and Mental Retardation for the State. He later served as a Director of Compliance enforcing a Federal Court Order on a maximum security prison for the criminally insane, a Justice of the Peace, a Notary Public and as an Auxiliary Police Officer in the State of New York. Ray ran for the House of Delegates and as a Magistrate with the idea that government 'servants' were to be held accountable to the people for their actions. In addition Ray has also served as Pastor in a Christian Church and as a Messianic Rabbi in a Messianic Jewish Congregation. He has also ministered on both radio and television and has been a Baritone Soloist in various churches when asked to do so. When the Messiah comes all men will be mandated to observe the Commandments of Yahweh: i.e. the Feasts of Yahweh, His Sabbaths, the New Moons, and the Dietary Laws of the written TORAH. Ray's work and ministry is to prepare and to teach Believers the importance of keeping Yahweh's laws and commandments in accordance with the Lord's wishes and desires for us. To raise up the 'Tabernacle of David' in preparation for the coming of the Lord, the Church must rebuild and restore Christianity upon the bedrock foundation of the Apostles and Prophets, which is the written TORAH. Ray's many books on Messianic Judaism are a testimony of the dedication of his life to preparing the way for the coming of the Messiah. As he is able, he intends to make these books available on the internet for worldwide access to everyone, everywhere.