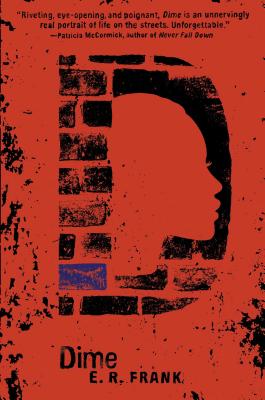 
This title is likely unavailable. Email or call for price and availability.
The startling realities of teen prostitution are revealed in this eye-opening, heartbreaking story from the author of America, which Booklist called “a piercing, unforgettable novel” and Kirkus Reviews deemed “a work of sublime humanity.”

As a teen girl in Newark, New Jersey, lost in the foster care system, Dime just wants someone to care about her, to love her. A family. And that is exactly what she gets—a daddy and two “wifeys.” So what if she has to go out and earn some coins to keep her place? It seems a fair enough exchange for love.

Dime never meant to become a prostitute. It happened so gradually, she pretty much didn’t realize it was happening until it was too late.

But when a new “wifey” joins the family and Dime finds out that Daddy doesn’t love her the way she thought he did, will Dime have the strength to leave? And will Daddy let her?
E.R. Frank is the author of America, Friction, Wrecked, and Dime. Her first novel, Life Is Funny, won the Teen People Book Club NEXT Award for YA Fiction and was also a top-ten ALA 2001 Quick Pick. In addition to being writer, E.R. Frank is also a clinical social worker and psychotherapist. She works with adults and adolescents and specializes in trauma.
"a tremendously affecting novel"
— Kirkus Reviews

* "gritty, graphic, and shatteringly painful to read...a masterfully told, unforgettable tale of what hope looks like in desperate
circumstances, and of the struggle to find power in one’s voice."
— Booklist - Starred Review

"Riveting, eye-opening and poignant, Dime is an unnervingly real portrait of life on the streets. It's a world where pimps use charm, cunning and violence to exert gradual - then total - control over vulnerable girls. Until Dime, a girl nearly broken by her situation, somehow finds an exit. If not for herself, at least before it's too late for someone even more defenseless than she is. Unforgettable."
— Patricia McCormick, Author of Never Fall Down