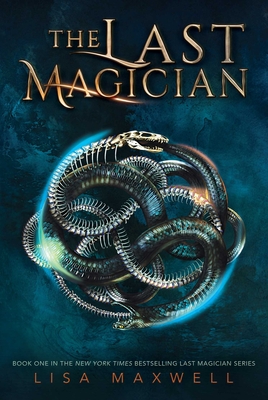 This is book number 1 in the The Last Magician series.

A girl travels back in time to find a mysterious book that could save her future in Lisa Maxwell’s “splendid series opener” (Kirkus Reviews).

Stop the Magician.
Steal the book.
Save the future.

In modern-day New York, magic is all but extinct. The remaining few who have an affinity for magic—the Mageus—live in the shadows, hiding who they are. Any Mageus who enters Manhattan becomes trapped by the Brink, a dark energy barrier that confines them to the island. Crossing it means losing their power—and often their lives.

Esta is a talented thief, and she's been raised to steal magical artifacts from the sinister Order that created the Brink. With her innate ability to manipulate time, Esta can pilfer from the past, collecting these artifacts before the Order even realizes she’s there. And all of Esta’s training has been for one final job: traveling back to 1902 to steal an ancient book containing the secrets of the Order—and the Brink—before the Magician can destroy it and doom the Mageus to a hopeless future.

But Old New York is a dangerous world ruled by ruthless gangs and secret societies, a world where the very air crackles with magic. Nothing is as it seems, including the Magician himself. And for Esta to save her future, she may have to betray everyone in the past.
Lisa Maxwell is the New York Times bestselling author of young adult fantasy, including the Last Magician series and Unhooked. She’s worked around words all her life and is currently a professor at a local college. She has strong opinions about pasta and a soft spot for loud music and fast cars. When she’s not writing books, you can usually find her going on adventures with her husband and two amazing boys. Though she grew up in Akron, Ohio, she now calls northern Virginia home. Follow her on Instagram @LisaMaxwellYA or sign up for her newsletter to learn more about her upcoming books at Lisa-Maxwell.com.
"This twisty tale of alchemy and magic in Gilded Age New York will keep you guessing until the very last page."
— Cinda Williams Chima, New York Times and USA Today bestselling author

"A twisty, spellbinding romp. Inserting feuding magical factions into an already tumultuous time in American history, Maxwell’s The Last Magician mesmerized me until the very last page."
— Janet B. Taylor, author of Into the Dim and Sparks of Light

"Intriguing, romantic, and full of twists, THE LAST MAGICIAN kept me reading late into the night. The richly imagined alternative version of 1901 New York City pulled me in, but the fascinating characters had me turning the pages, desperate to find out what happened to them."
— Anne Blankman, author of the Prisoner of Night and Fog duology

Gangs, immigrants, and the rich keeping the poor down, with a twist. In an alternate New York, magic is wielded by the Mageus, whose innate affinities vary widely, and the Order, who disdain but use magic in rituals that limit the Mageus' freedom. For centuries, Mageus have entered but cannot leave Manhattan thanks to the Brink, a magical barrier surrounding the island. Esta's affinity involves manipulating time, and the professor who raised her has sent her from the present day to 1901 to stop the destruction of a book that could potentially destroy the Brink. Shifting third-person perspective follows Esta into the past as she infiltrates Dolph Saunders' gang and becomes involved with Harte Darrigan, the handsome magician who destroyed the book. Crisp pacing and plenty of details tell the story of engaging, if selfish, characters in their late teens and early 20s working at cross purposes for big reasons. The past is slightly romanticized but largely realistic: the Mageus function as a stand-in for any immigrant group subject to prejudice, and Esta's contemporary attitudes shine a light on outdated attitudes, while through the experiences of Chinese Jianyu (the only nonwhite member of Dolph's gang), some of the racial prejudices of the past are confronted. A doorstopper with a total shakeup of an ending: don't miss this splendid series opener. (map) (Historical fantasy. 12-adult)
— Kirkus Reviews

In the present day, those with an affinity for magic, the Mageus, remain in hiding, but it has long been speculated that if someone can go back in time and get a significant book, then the fates of the Mageus across history would be changed. Esta, a talented thief, has been trained for the job, so she’s sent back to 1901 and Old New York to snatch the book and save the Mageus. She’s distracted by what she believes is a tragedy that happened just as she time traveled away from the pres- ent, and by the brooding, mysterious, and handsome magician she resists loving in 1901, but she never fully loses track of her ultimate goal. For a capable thief, Esta is surprisingly bad at reading others, but the author effectively paints her as someone whose understanding is limited by the role for which she was raised. As there are significant plot reveals all the way through (we actually learn a secret about Esta’s dad, for example, only about twenty pages from the end), the book never loses urgency, and readers will likely hit the final page wishing for more. Hand this off to fantasy buffs who appreciate historical fiction, since a good deal of the novel takes place in the early twentieth century, and Maxwell’s attention to detail makes that time period seem vivid and compelling.
— BCCB

The age-old battle between the Order of Ortus Aurea, who think magic can be created, and the Mageus, whose magic is innate, is intensifying; and each side is trying to collect magical tools to gain control—including the powerful text known as the Ars Arcana. Esta (Mageus), trained as a time-traveling thief, is sent back to early twentieth-century New York to prevent the book’s destruction at the hands of a mysterious person known only as the Magician. This stripped down plot summary does no justice to the captivating and complicated story created by Maxwell. A mix of historical fiction, romance, fantasy, and magic, the well-plotted and tightly paced story moves between present day and 1901 New York, a time of gangs, tenements, turf wars, and a fascination with science and technology as a cure for society’s ills. A few historical figures make an appearance, J. P. Morgan, for example, but this is definitely Esta’s story, and she is a smart and feisty female protagonist in whom readers will delight. — Cindy Welch
— Booklist online