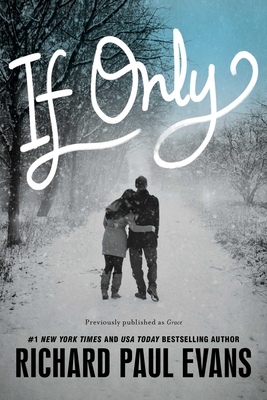 
Available in Warehouse. Wait for Email Confirmation for ETA
Originally titled Grace, this award-winning novel gets a brand-new look in this beautiful repackage.

From the #1 New York Times bestselling author of The Christmas Box and The Mistletoe Promise comes a novel filled with hope and redemption about two teens who turn to each other to find trust and love.

If only I could stay with you forever. I would.

Eric is having a hard time adjusting to his family’s move from California to Utah. Then he meets Grace—his classmate and a runaway—dumpster diving behind the burger joint where he works. Eric decides the only thing to do is to hide Grace in the clubhouse in his backyard.

With the adults concerned about the looming Cuban Missile Crisis and his father recovering from an immune disorder, Eric grows closer to Grace but can their new relationship survive the harsh realities of life?

In this poignant, sensitive, and realistic narrative, Richard Paul Evans shares Grace’s heartbreaking predicament and Eric’s realization that everything is not as simple as it might appear.
Richard Paul Evans is the #1 New York Times and USA TODAY bestselling author of more than forty novels. There are currently more than thirty-five million copies of his books in print worldwide, translated into more than twenty-four languages. Richard is the recipient of numerous awards, including two first place Storytelling World Awards, the Romantic Times Best Women’s Novel of the Year Award, and is a five-time recipient of the Religion Communicators Council’s Wilbur Awards. Seven of Richard’s books have been produced as television movies. His first feature film, The Noel Diary, starring Justin Hartley (This Is Us) and acclaimed film director, Charles Shyer (Private Benjamin, Father of the Bride), will debut in 2022. In 2011 Richard began writing Michael Vey, a #1 New York Times bestselling young adult series which has won more than a dozen awards. Richard is the founder of The Christmas Box International, an organization devoted to maintaining emergency children’s shelters and providing services and resources for abused, neglected, or homeless children and young adults. To date, more than 125,000 youths have been helped by the charity. For his humanitarian work, Richard has received the Washington Times Humanitarian of the Century Award and the Volunteers of America National Empathy Award. Richard lives in Salt Lake City, Utah, with his wife, Keri, and their five children and two grandchildren. You can learn more about Richard on his website RichardPaulEvans.com.