What I Leave Behind (Hardcover) 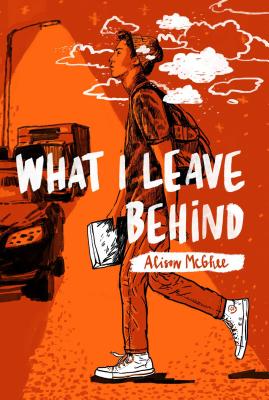 What I Leave Behind (Hardcover)

After his dad dies of suicide, Will tries to overcome his own misery by secretly helping the people around him in this exquisitely crafted story made up of one hundred chapters of one hundred words each, by award-winning and bestselling author Alison McGhee.

Sixteen-year-old Will spends most of his days the same way: Working at the Dollar Only store, trying to replicate his late father’s famous cornbread recipe, and walking the streets of Los Angeles. Will started walking after his father committed suicide, and three years later he hasn’t stopped. But there are some places Will can’t walk by: The blessings store with the chest of 100 Chinese blessings in the back, the bridge on Fourth Street where his father died, and his childhood friend Playa’s house.

When Will learns Playa was raped at a party—a party he was at, where he saw Playa, and where he believes he could have stopped the worst from happening if he hadn’t left early—it spurs Will to stop being complacent in his own sadness and do some good in the world. He begins to leave small gifts for everyone in his life, from Superman the homeless guy he passes on his way to work, to the Little Butterfly Dude he walks by on the way home, to Playa herself. And it is through those acts of kindness that Will is finally able to push past his own trauma and truly begin to live his life again. Oh, and discover the truth about that cornbread.
Alison McGhee is the New York Times bestselling author of Someday, as well as Dear Sister, What I Leave Behind, Pablo and Birdy, Where We Are, Maybe a Fox with Kathi Appelt, Firefly Hollow, Little Boy, So Many Days, Star Bright, A Very Brave Witch, Dear Brother, and the Bink and Gollie books. Her other children’s books include All Rivers Flow to the Sea, Countdown to Kindergarten, and Snap!. She lives in Minneapolis, Minnesota, and Laguna Beach, California. You can visit her at AlisonMcGhee.com.
Sixteen-year-old Will is a walker. Things have to be walked out through the soles of your feet, he believes. And Will has things that need to be walked out: his best friend since grade school, Playa, has been raped at a party that he had left too early to save her. His father is dead—a suicide. Will was 13 when that happened, and that’s when he began to walk. His father made the best cornbread; the morning he died, he offered Will some, but Will, headed for school, said “nah.” Now he wonders if he had said “yes,” would his father still be alive? In memory of his father, Will tries making cornbread, too, but it’s never as good as his father’s. He gives it to Superman, the homeless guy he passes on his walks. He secretly leaves presents for the little boy he passes, too, who is always waiting for butterflies to land. Most important, he starts leaving little gifts at Playa’s doorstep with an unsigned note with something his father used to say: "Don’t let the bastards get you down." McGhee’s short, understated novel is an artful exercise in melancholy. Though it occasionally veers close to sentimentality, it always manages to skirt it, conveying emotions that are pure and sincere. Will is a classic wounded teenager who is nevertheless his own person. Everybody loved his father—and every reader will love openhearted Will. — Michael Cart
— Booklist *STARRED REVIEW*

In McGhee’s (Never Coming Back, 2017, etc.) latest offering, a 16-year-old grapples with his father’s suicide and the rape of his childhood friend at a party.

Three years have passed since Will’s father took his life. Every Tuesday night as his mother works the overnight shift, Will tries and fails to re-create his father’s cornbread recipe. He has a job at a dollar store, where he gives his socially awkward boss the nickname Major Tom, after the David Bowie song. He feels driven to wander the streets of Los Angeles, connecting with a precocious brown-skinned, black-haired child he calls “little butterfly dude” and offering his failed batches of cornbread to Superman, a homeless person. He recalls memories of his father, attempting to make sense of his suicide, and agonizes over his old friend Playa (named by beach-loving parents) and his guilt over leaving the party early. He drops in on Mrs. Lin, who runs a Chinese store he used to visit with his father, fascinated by the 100 blessings she sold. Told from Will’s fragmented, raw perspective, this slim novella packs a profound punch. Numbers from one to 100 written in Chinese (verso) accompany each snapshot from Will’s life, relayed in sparse, taut language (recto). Most characters are assumed white.

We all have our own ways of coping with life and its many ups and downs, and for sixteen-year-old Will his thing is walking—walking all the sorrows of the day right out of the soles of his feet in the nighttime. It began with his father’s suicide, but when his old friend Playa is raped at a party both of them were at, by three boys they know, the grief becomes more than he can handle. Lodged in the back of his walking mind are the places he won’t go, the places that are too painful to walk past—Playa’s house, the Chinese blessing store where Will and his father would contemplate the display of 100 blessings, and the bridge on Fourth Street where his father died. In this tale of teenage contemplation, McGhee artfully illustrates the tangled web wherein grief intertwines with the mundane. Will’s character reads outwardly as typical teenager—indifferent, unbothered, cool. His reality, however, as conveyed through introspective thought and memory, proves him to be more complex, caring, and emotionally adept than he lets on. The book unfolds in a series of 100 vignettes, each 100 words long, each marked by a Chinese number. There’s no sweet ending here, but there is resolve in friendship and in the lingering words of Will’s father—“Carry on, my wayward son.”
— BCCB

In this spare, emotionally raw novella, the deeply thoughtful 16-year-old narrator, Will, vainly tries to recreate his father’s cornbread recipe, and he walks through L.A. neighborhoods while his mom works overnight at the hospital. In finely honed chapters, each introduced by a Chinese character, McGhee (Never Coming Back) crafts a slim cast of strongly sketched individuals, including Will’s socially awkward boss at the Dollar Only store, his childhood friend Playa, and Mrs. Lin, who operates a Chinese blessings store. The narrative gradually reveals the troubles Will seeks to walk off. “Sometimes the right route is the route not past other places, places you maybe love but can’t walk by right now. Like Playa’s house. Like the blessings store. Like the river bridge over Fourth Street.” McGhee skillfully evokes sense memory, as Will attempts to find solace in his nighttime wanderings. Ultimately, the piercing narrative offers an affirmation of remaining connected to others through loss as Will embraces his relationships and begins to heal.
— Publishers Weekly *STARRED REVIEW