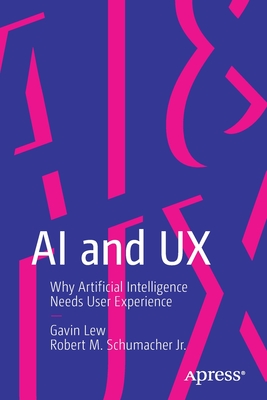 
Available in Warehouse. Wait for Email Confirmation for ETA
1. Introduction to AI and UX2. AI and UX: Parallel Journeys3. AI-Enabled Products are Emerging All around Us4. Garbage In; Garbage Out5. Applying a UX Framework

Gavin Lew has 25 years of experience in the corporate and academic environment. He founded User Centric and grew the company to be the largest private UX consultancy in the United States. After selling the company, he continued to lead a North American UX team to become one of the most profitable business units of the parent organization. He is a frequent presenter at national and international conferences and the inventor of several patents. He is an adjunct professor at DePaul and Northwestern Universities. Gavin has a Masters in Experimental Psychology from Loyola University, and is currently the Managing Partner of Bold Insight, part of ReSight Global, a globally funded UX consulting practice across North America, Europe and Asia.Robert M. Schumacher, Jr. has more than 30 years of experience in academic, agency and corporate worlds. He co-owned User Centric with Gavin from its early stages until it was sold to GfK in 2012. While at User Centric, Bob helped found the User Experience Alliance, a global alliance of UX agencies. As well he founded User Experience Ltd, a UX agency in Beijing. He is Co-founder, co-owner, and Managing Partner of Bold Insight, part of ReSight Global, a global UX company. He has several patents and dozens of technical publications, including user interface standards for health records for the US government. He also is an Adjunct Professor at Northwestern University. Bob has a Ph.D. in Cognitive and Experimental Psychology from the University of Illinois at Urbana-Champaign.