Advanced Arduino Techniques in Science: Refine Your Skills and Projects with PCs or Python-Tkinter (Paperback) 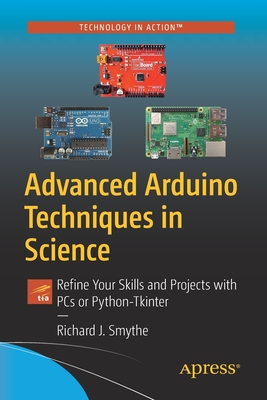 Advanced Arduino Techniques in Science: Refine Your Skills and Projects with PCs or Python-Tkinter (Paperback)


Available in Warehouse. Wait for Email Confirmation for ETA
If you're already a comfortable programmer, familiar with your single board computer and microcontroller, and are ready to refine your projects, then let's get started This book covers advanced methods and techniques for creating, implementing, monitoring and controlling your experiments and projects with your Raspberry Pi and Arduino. Projects will use Python and the Tkinter GUI and will also cover software development for adding real time data display to the Raspberry Pi.
You'll review concepts of frequency occurring in nature and the techniques used to measure the frequency of electrically varying signal voltages. You'll also study procedures for safe design, implementation and operation of experimental measurement systems operating at high heats and high temperatures. Throughout the book you'll look at sources and types of errors, and best practices for minimizing and reducing them.
Often times there are simple environmental issues hindering what would seem to be simple projects: high temperatures, controlling the power for elevated temperature with the proportional integral and derivative (PID) algorithm, and the limitations imposed by eight bit code, the influence of noise and errors in measured data, and many more. Advanced Arduino Techniques in Science provides the best tools to move past those restrictions.
What You'll Learn
Who This Book Is For
Educators, researchers, students, makers, citizen scientists, or hobbyists can all extend their measuring capability or improve upon the quality of their collected data. The book is directed to those with intermediate skills in programming and those who are comfortable with Python programming and Arduino C.
Richard J. Smythe attended Brock University in its initial years of operation in southern Ontario and graduated with a four year honours degree in chemistry with minors in mathematics and physics prior to attending the University of Waterloo for a master's degree in analytical chemistry and computing science and a doctorate in analytical chemistry. After a post-doctoral fellowship at the State University of New York at Buffalo in electro-analytical chemistry Richard went into business in 1974 as Peninsula Chemical Analysis Ltd. Introduced in 1966 to time-shared computing with paper tapes, punched cards, BASIC prior to Fortran IV at Waterloo, the PDP 11 mini-computers and finally the PC, Richard has maintained a currency in physical computing using several computer languages and scripting codes. Professionally Richard has functioned as a commercial laboratory owner and is currently a consulting analytical chemist, a civil forensic scientist as PCA Ltd., a full partner in Walters Forensic Engineering in Toronto, Ontario and senior scientist for Contrast Engineering in Halifax Nova Scotia. A large portion of Richard's professional career consists of devising methods by which a problem that ultimately involves making one or more fundamental measurements can be solved by using the equipment at hand or using a readily available "off-the shelf/ out of the box" facility to provide the data required.