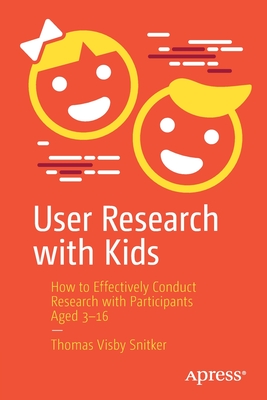 
Available in Warehouse. Wait for Email Confirmation for ETA
Preface An introduction to research with kids
Chapter 1: Understanding kids and their experiences
Chapter 2: How (not) to ruin perfectly good research in 18 steps
Chapter 3: Succeed through be.
Thomas Visby Snitker is a senior user research manager at LEGO (The LEGO Agency), and formerly the CEO, owner, and founder of Snitker Group (2005). Thomas is passionate about user centricity, research, user experience (UX), and usability. He enjoys writing and has contributed two chapters on user research around the world and on the impact of culture on user research in the book Handbook of Global User Research (2009, Morgan Kaufman Books). He's also published a book called Breaking Through to the Other Side - Using User Experience in Web, Interactive TV and Mobile Services.Thomas is a frequent speaker at Danish and international conferences, such as The UX Masterclass, and blogs for the Danish edition of Computerworld. In addition, he serves as external reviewer at the IT University of Copenhagen, The Copenhagen Business School, The Technical University of Denmark, and the Information Science School of Copenhagen.Before he founded Snitker Group, Thomas worked as a usability specialist in IT (at KMD), in a media agency (Mediacom and Beyond Interactive), and a web agency (Signal Digital and GreyDigital).