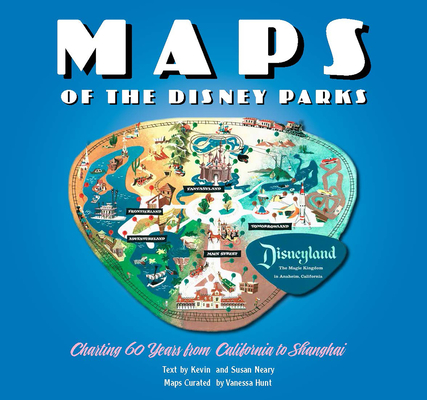 This deluxe Disney atlas is bursting with gorgeous park maps from around the work and across the six decades!
It all started with a map. . . . Maps of the Disney Parks are more than just atlases used by guests to find their way to Big Thunder Mountain Railroad. They are snapshots of a place and time, relics treasured by collectors, and gorgeous pieces of artwork. In fact, it was a map (imagined by Walt Disney and drawn by Herbert Ryman) that was used to sell the idea of Disneyland to investors. Unfold this book of beautiful maps from when the very first Disney Park opened in 1955 right up to today. Discover details on how and why the domestic and international parks have changed over time, and enjoy sixty years worth of skillful creativity.
Searching for that perfect gift for the Disney theme park fan in your life? Explore more archival-quality books from Disney Editions:

KEVIN NEARY has coauthored The Hidden Mickeys of Walt Disney World (2016) with his wife SUSAN and four Disney trivia books (1992-2000) with Dave Smith for The Walt Disney Company as well as two baseball books (Major League Dads: Baseball’s Best Players Reflect on the Fathers Who Inspired Them to Love the Game, 2012, and Closer: Major League Players Reveal the Inside Pitch on Saving the Game, 2013) with Leigh A. Tobin for Running Press. Kevin has also written 715: Reflections of Hammerin' Hank & the Home Run that Made History (2015) for Skyhorse Publishing. His next baseball book will be The Manager: Rules of Engagement and will feature a collection of interviews and stories from fifty of the game's best managers over the past fifty years.VANESSA HUNT is a Walt Disney Imagineer and a lifelong Disney aficionado. Her education is in art history, and she is part of the group responsible for the more than 160,000 pieces of original artwork preserved in the Walt Disney Imagineering Art Collection. She has been curator of several Imagineering exhibits featuring many of the works from the Art Library collection, and has consulted for The Walt Disney Family Museum. Vanessa is also the coauthor of the wildly popular Poster Art of the Disney Parks (2012) and Maps of the Disney Parks (2016) as well as the designer on Marc Davis in His Own Words: Imagineering the Disney Theme Parks (2019).

PRAISE FOR MAPS OF THE DISNEY PARKS"I've been intrigued by the process of mapping Disneyland and the other parks since I first pored over the fold-out map in the August 1963 issue of The National Geographic. Years later I had the privilege of meeting Herb Ryman who mapped 'The Happiest Place on Earth' for Walt Disney before it was even built (!) and Sam McKim who created many of our treasured Disney maps. To look at a map of a Disney park is to relive visits past and dream of visits yet to be. . . This book promises to satisfy those twin emotions!"—<strong>Brian Sibley</strong>, writer, broadcaster, and Disney scholar

PRAISE FOR MAPS OF THE DISNEY PARKS"There are many books out there about Walt Disney, The Walt Disney Company, and the Disney Parks, and two that are a must for any Disney fan are Maps of the Disney Parks: Charting 60 Years from California to Shanghai and Disney A to Z: The Official Encyclopedia, 5th Edition. . . . [Maps] is a beautiful coffee table book detailing six decades of maps and how each of the Parks evolved over the years. . . . This is a perfect book for the Disney fan and Disney historian alike."—<strong><em>Huffington Post</em></strong>