Neanderthal Opens the Door to the Universe (Paperback) 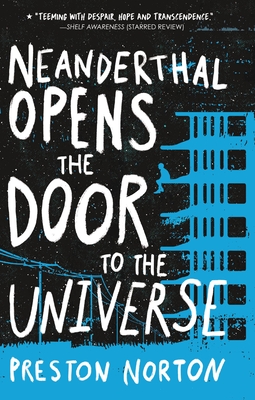 Neanderthal Opens the Door to the Universe (Paperback)


This title is likely unavailable. Email or call for price and availability.
A “funny and sweetly oddball” (Publishers Weekly, starred review) novel about an odd-couple friendship formed by a mission to make their high school to suck less, for readers “seeking doors to the universe" (Booklist, starred review) and a razor sharp, moving, and outrageously funny read. Cliff Hubbard is a huge loser. Literally. His nickname at Happy Valley High School is Neanderthal because he’s so enormous—6’6” and 250 pounds to be exact. He has nobody at school, and life in his trailer-park home has gone from bad to worse ever since his older brother’s suicide. And there’s no one Cliff hates more than the nauseatingly cool quarterback Aaron Zimmerman, who after a near-death experience claims God gave him a list of things to do to make Happy Valley High suck less. And God said there’s only one person who can help: Neanderthal.

To his own surprise, Cliff says he’s in. As he and Aaron make their way through the List, which involves a vindictive English teacher, a mysterious computer hacker, a decidedly unchristian cult of Jesus Teens, the local drug dealers, and the meanest bully at HVHS, Cliff feels like he’s part of something for the first time since losing his brother. But fixing a broken school isn’t as simple as it seems, and just when Cliff thinks they’ve completed the List, he realizes their mission hits closer to home than he ever imagined.
Preston Norton is: bisexual, slightly genderqueer, married. His partner, Erin, is trying to put him on a diet, and he’s revolting (both contexts apply). He has taught seventh grade and ninth grade English, mentored drug addicts, and mowed lawns (in no particular order). He is obsessed with 2001: A Space Odyssey and Quentin Tarantino.
AccoladesALA 2019 Top Ten Best Fiction for Young AdultsYALSA Best Fiction for Young Adults List2018 Cybils Award, young Adult Fiction NomineeTeenreads' Teen Choice Book Award 2019, NomineeGeek Mom: Upcoming Reads for Kids Summer Reading Fun (selection, 2018)Hypable: Start summer off right with these June 2018 YA book releases! (selection)Houston Family Magazine: Summer Reading Picks (selection, 2018)

"Preston Norton brings an exciting, sharp voice to YA. NEANDERTHAL is both heartbreaking and hopeful."—Goldy Moldavsky, bestselling author of Kill the Boy Band

*"The book... cogently explores large issues that plague and perplex teens... Will appeal to teens who are, themselves, seeking doors to the universe."—Booklist (starred review)

*"Preston Norton's.... characters speak with a whip-smart, profanity-laced snark that belies the fragility lurking in even the biggest brutes. Neanderthal Opens the Door to the Universe is a book for any teen, teeming with despair, hope and transcendence."—Shelf Awareness (starred review)

*"Funny and sweetly oddball book... At the story's core is an unsentimental treatment of a bullied kid and his one-time bully discovering their commonalities. That Norton accomplishes this without moralizing and in inventively rhythmic and pop-culture-saturated language only adds to the fun."—Publishers Weekly (starred review)

"Touching, funny, and utterly unforgettable."—Robyn Schneider, author of The Beginning of Everything

"Cliff... is intelligent and vulgar in equal measure in this story about belief both transcendental and intimate... With a number of references any cinephile would appreciate, the cleverly plotted novel attests that discovering meaning anywhere or with anyone is invaluable."—BCCB