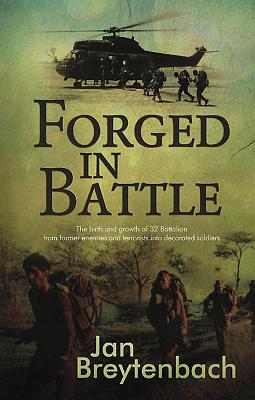 
This title is likely unavailable. Email or call for price and availability.
In 1975, 32 Battalion was formed in great secrecy from a group of badly trained, ill-disciplined remnants of the Angolan guerrilla movement, the FNLA. Founding commander Colonel Jan Breytenbach, a former Recce, tells of the birth and early history of this elite Buffalo Battalion led by South African officers. He turned these unwanted orphans from the Angolan guerrilla war into one of the most respected and feared units to fight in Angola. His method was a simple one ? he instilled in his soldiers a total commitment and loyalty to the unit, rather than to a country or cause. Nicknamed Os Terriveis (the Terrible Ones), they became one of the best counter-insurgency forces in the SADF. Forged in Battle follows the birth and growth of 32 Battalion from former enemies and terrorists into decorated soldiers.REVIEWS An inherently riveting account, "Forged in Battle" is a compelling read from first page to last. Exceptionally well written, informed and informative, "Forged in Battle" is a strongly recommended addition to community and academic library 20th Century Military History collections, as well as the personal reading lists of military history buffs.Midwest Book Review 4.4.2016.