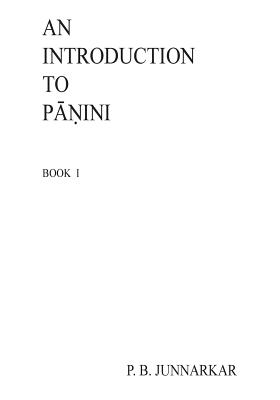 
Available in Warehouse. Wait for Email Confirmation for ETA
This book cannot be returned, cancelled, or exchanged. Please call for availability and pricing
This book explains Sanskrit grammar. The first of a set of 4 volumes, it illustrates the rudiments of the use and application of the sutras of Panini's Ashtadyayi to the present-day student. The author has laid out the application of the sutras in simple English with examples that are easily understood. This first volume explains the following - The Sanskrit alphabet - Pratyaahaar sutras; guna and vriddhi; General tense affixes, the Present Tense; conjugations of the roots of the Bhvadi, Divadi and Tudadi classes; General Case affixes; declensions of the masculine and neuter Pratipadik bases; rules of Sandhi; relation of words in a sentence. The next three volumes will go into greater details as listed in the present book on the last page.
The late Prof. Prasannakumar B. Junnarkar was born in a family devoted to classical learning. Prasannakumar's formal university education was in Mathematics, in which he took his Master's degree from Elphinstone College, Bombay. He also obtained a degree in Law. In 1922 he joined the Dacca University, where he served till his retirement in 1948 as the Head of the Department of Commerce and later as the Dean of the Faculty of Commerce.Though he had been a student of mathematics and law and was for many years a teacher of commerce, Prof. Junnarkar's first love was always Sanskrit. He began the work of simplifying Paninian grammar while still at the Dacca University, but the bulk of the work was the product of 14 years' unaided labour continued despite ill health - in his quiet retirement at Navsari in Gujarat. He died at Baroda in 1975 at the age of 82.