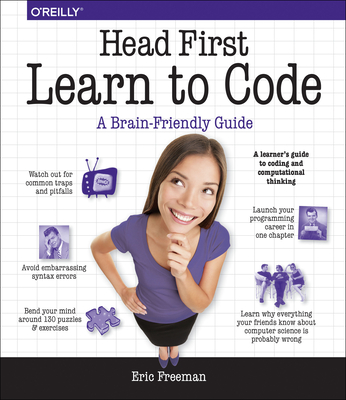 What will you learn from this book?

It's no secret the world around you is becoming more connected, more configurable, more programmable, more computational. You can remain a passive participant, or you can learn to code. With Head First Learn to Code you'll learn how to think computationally and how to write code to make your computer, mobile device, or anything with a CPU do things for you. Using the Python programming language, you'll learn step by step the core concepts of programming as well as many fundamental topics from computer science, such as data structures, storage, abstraction, recursion, and modularity.

Why does this book look so different?

Based on the latest research in cognitive science and learning theory, Head First Learn to Code uses a visually rich format to engage your mind, rather than a text-heavy approach that puts you to sleep. Why waste your time struggling with new concepts? This multi-sensory learning experience is designed for the way your brain really works.

Eric Freeman recently ended nearly a decade as a media company executive, having held the position of CTO of Disney Online & Disney.com at The Walt Disney Company. Eric is now devoting his time to WickedlySmart.com and lives with his wife and young daughter in Austin, TX. He holds a Ph.D. in Computer Science from Yale University.