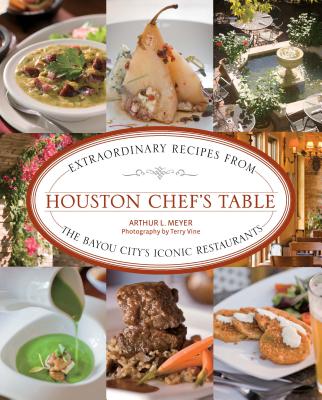 
This title is likely unavailable. Email or call for price and availability.
Houston is the dining out capital of Texas, with a food scene that reflects the city itself--talented, entrepreneurial, diverse, and quite modern. Barbeque and Tex-Mex are certainly present, but do not define the dining experience. Modern American cuisine brought into focus by Mark Cox of Mark's American Cuisine and fine-dining Italian style served by award-winning Tony's both set the stage for a dining experience independent of Texas' reputation for big steaks and enchiladas. And numerous establishments court the palate for Thai, Indian, Caribbean, Brazilian, and Turkish foods. Houston Chef's Table is the first cookbook to gather Houston's best chefs and restaurants under one cover. Including a signature at home recipe from seventy iconic dining establishments, the book is a celebration of the city's diverse cultural influences. Full-color photos throughout highlight fabulous dishes, famous chefs, and Houston landmarks.
Arthur L. Meyer is a restaurant and bakery consultant who has cooked professionally since 1963. He has taught cooking internationally, is considered an expert on world cuisines, and has achieved Master status in baking. He opened a specialty bakery in 1983, which became the subject and name of his first cookbook, Texas Tortes. Art has written five additional cookbooks including Baking Across America, Corsican Cuisine. Danish Cooking and Baking Traditions, and co-authored the Appetizer Atlas, which won Best in the World from Gourmand Cookbook Awards in 2003. Art resides in Austin Texas where he had been a Lecturer in Organic Chemistry for 15 years at the University of Texas, and continues to teach chemistry at the community college.