I Got the Horse Right Here: Damon Runyon on Horse Racing (Hardcover) 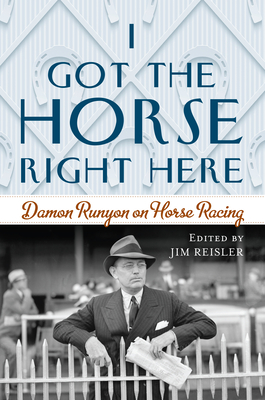 I Got the Horse Right Here: Damon Runyon on Horse Racing (Hardcover)


Available in Warehouse. Wait for Email Confirmation for ETA
Burned out by working the baseball beat for years, in the summer of 1922 Damon Runyon was looking for a new sport to cover for The New York American as a change of pace. Having pilloried golf just a few years before, he went to Saratoga that August to sample horse racing and found that "There, right in front of him, were so many of the characters he so loved from his time covering the comings and goings of the Manhattan night crowd." This was just the tonic Runyon needed to emerge from his malaise. Runyon didn't just cover the great races and which horse won: he would get to the track days before and roam along the backstretch, speaking with the trainers, the gamblers, the rich owners, and the wise guys, many of which became model characters in his fiction and in the musical Guys and Dolls. This book collects the best of Runyon's horse racing columns to 1936, when he moved on to other beats.
Jim Reisler is the Employee Communications Manager for the New York Racing Association, where he directs employee and internal communications at this nationally recognized organization that operates thoroughbred racing year-round at three storied tracks, Belmont Park, Saratoga Race Course and Aqueduct Racetrack. He was written for such newspapers and magazines as The New York Times, Sports Illustrated, and Newsweek, and he is the author of Babe Ruth: Launching the Legend and Guys, Dolls, and Curveballs: Damon Runyon on Baseball.