International Handbook of Psychological Well-Being in Children and Adolescents: Bridging the Gaps Between Theory, Research, and Practice (Paperback) 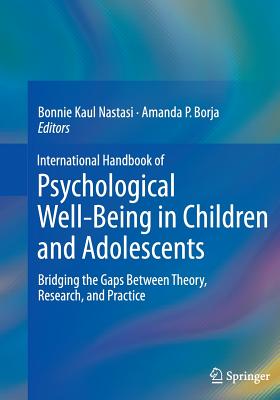 Bonnie Kaul Nastasi, Ph.D. (Kent State University, 1986, School Psychology & Early Childhood Education), is a Professor in the Department of Psychology, School of Science and Engineering, at Tulane University, and co-directs the Trauma Specialization in School Psychology at Tulane. Dr. Nastasi's research focuses on the use of mixed methods designs to develop and evaluate culturally appropriate assessment and intervention approaches for promoting mental health and reducing health risks such as sexually transmitted infections (STIs) and HIV, both within the US and internationally. She directed a multi-country study of psychological well-being of children and adolescents with research partners in 12 countries from 2008-2013, which forms the basis of this book. She has worked in Sri Lanka since 1995 on development of school-based programs to promote psychological well-being and conducted programming in the Southern province of Sri Lanka following the December 2004 tsunami. She was one of the principal investigators of an interdisciplinary public health research program to prevent STIs among married men and women living in the slums of Mumbai, India, from 2002-2013. She is active in promotion of child rights and social justice within the profession of school psychology and has directed the development of a curriculum for training school psychologists internationally on child rights, a joint effort of International School Psychology Association (ISPA), International Institute of Child Rights & Development (IICRD), Division 16 of the American Psychological Association (APA), and Tulane University's School Psychology Program. Dr. Nastasi is an Associate of the IICRD since 2011; a past-president of APA's Division 16; 2013-2014 Co-Chair of APA's Committee on International Relations in Psychology; Chair of ISPA's Professional Development and Practices Committee; and President-elect of ISPA.Amanda P. Borja, M. S.(Tulane University, Psychology, 2012; Mercy College, Urban Education, 2007), is a School Psychology doctoral candidate at Tulane University. She received her B. A. from Binghamton University in 2005, and was a special education teacher in New York City for four years. Her research interests have focused on phenomenology about stress, coping, and psychological well-being among teachers and children in international contexts. Her work has contributed to the continued development, analysis of local and cross-site data, and dissemination of Dr. Nastasi's Promoting Psychological Well-Being Globally project.