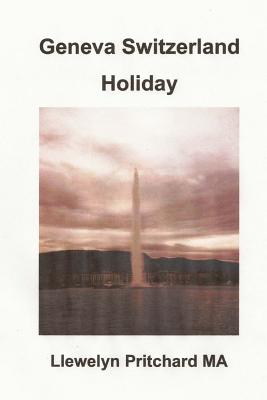 
Available in Warehouse. Wait for Email Confirmation for ETA
This book cannot be returned, cancelled, or exchanged. Please call for availability and pricing
Geneva Swiss Holiday Seneng iki foto werna, kalebu apik Le Jet d'Eau, Sculpture ing Parks, Botani lan Sensori Kebon lan iku dijupuk saka trip boat on Lake Geneva salawase ing budget short -break liburan. "Ing apik banget Parks saka Geneva - Luwih saka 50 Kebon parks lan tumindak minangka kutha kang oksigen tank. Ing taman dumunung ing sadawaning lakeshore lan Parc des Bastions sing bener havens katentreman. Ing Geneva, sampeyan nemokake taman utawa Taman ngendhokke saindhenging meh saben sudhut "Ing Dome saka" Human Rights lan Alliance Kanggo Civilisations, kamar, akeh sampe sambungan lan ing Loka des Nations, ngadeg ing ngarep monumental 'Broken Ketua, ' sampeyan ngilingake Geneva kang sumbangan katentreman lan hak. Ing 'Broken Ketua' stands ing mung telung sikil... " Jawa Edition] Javanese Edition.
Interview with Llewelyn Pritchard: Where did you grow up, and how did this influence your writing? I grew up on the Black Mountain north of Swansea, South Wales. I haven't really got a clue how this influenced my writing except I suppose it instilled in me a great love of nature, adventure and the outdoors. I am the son of an elite collier and I would much rather take this opportunity to dedicate this great poem to his memory: "My father was a miner, He worked deep underground; The rush of drams and clanking chains. They were his daily sounds. He worked so far below the ground. Where coal was hewed by pick, The work so hard and wages small He didn't dare go sick. He crawled upon his belly. In drifts so low and narrow, The wind it whistled down the shaft. It chilled him to the marrow. He ate his food from a Tommy box, Shaped like a slice of bread, While squatting down upon the ground, Where spit and crumbs were shed. His water, it was in a Jack, to wet down clouds of dust, That gathered daily in his throat and lungs. Where it formed a deadly crust. We would listen for his footsteps, He then came into sight: This man, our Dad, as black as black, just like the darkest night; Right down his back white rivers ran amongst the dirt and grime, But you cannot wash away blue scars. That you get down the mine. Years now have passed. My father gone, But I am proud to say, My Father was a miner, until his dying day." by William Holden Llewelyn has worked with The Honourable Canadian Senator William (Bill) Rompkey, on writing the history of the Voluntary Service Overseas (VSO) in Labrador. This is what Bill wrote in his letter to the first get- together of the VSO teachers at Pateley Bridge, North Yorkshire 1-3 August 2003, ..".Labrador called to you and we are calling you now. I hope you will do what you can during these few days to fill in the Labrador record with your recollections and reflections. This too will be an important contribution to Labrador history. But mainly I hope you enjoy your time together. Llewelyn Pritchard has done a remarkable job in bringing you together. He is as shrewd as Holmes and as persistent as Poirot. He could even be a great Canadian! We owe him more than we can say. It's his event and I know it will be successful. All good wishes. Bill Rompkey"