Dream Like a Champion: Wins, Losses, and Leadership the Nebraska Volleyball Way (Paperback) 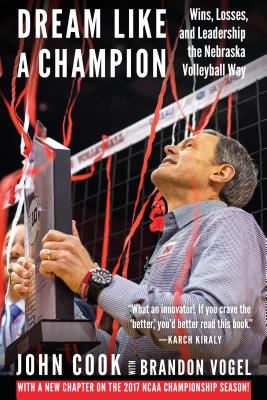 Since becoming the Nebraska women’s volleyball coach in 2000, John Cook has led the team to four national championships, seven NCAA semifinal appearances, and the nation’s top winning percentage in women’s volleyball. In Dream Like a Champion Cook shares the coaching and leadership philosophy that has enabled him to become one of the game’s winningest coaches.

Growing up in San Diego, Cook acquired his coaching philosophy from his experiences first as a football coach, then as a student of the sport of volleyball on the beaches of Southern California. After a stint as an assistant volleyball coach at Nebraska, he returned to Nebraska as head coach in 2000 and won the national championship in his first season. Even with a bar set so high, Cook saw at Nebraska’s tradition-rich program the potential for even greater growth and success. He decided to focus on higher expectations, training, motivation, goal setting, and other ways to build the strongest teams possible.

In Dream Like a Champion Cook shares the philosophy behind Nebraska’s culture of success and reveals how he’s had to learn, evolve, and be coached himself, even in his fifth decade as a coach. With openness and candor he delivers insights about his methods and passes along lessons that can be used by leaders in any field. Cook also shares behind-the-scenes anecdotes about Nebraska volleyball moments and players—and how he coaches and teaches his players about life beyond the court. This paperback edition features a new chapter about the 2017 national championship season.

John Cook is a two-time winner of the American Volleyball Coaches Association National Coach of the Year Award and was inducted into the American Volleyball Coaches Association Hall of Fame in 2017. Brandon Vogel is the managing editor of Hail Varsity magazine and has covered University of Nebraska athletics since 2011. His sportswriting has been featured by FoxSports.com, the Guardian, and CBSSports.com.

“Great coaches and teachers relentlessly strive for learning and improvement—in their people, in their teams, and in themselves. John Cook’s story is permeated with that pursuit: what an innovator! If you crave the ‘better,’ you’d better read this book.”—Karch Kiraly, head coach, U.S. women’s National Volleyball Team
— Karch Kiraly

“The thing that strikes me the most about John Cook is the amount of thought and energy he gives to every possible detail in coaching. John’s reflection about his own coaching and the Nebraska program frequently leads to action, which is how both an individual and a program stay ahead of the game. This is a very good book for anyone who has an interest in coaching and leadership.”—Terry Pettit, head coach, University of Nebraska women’s volleyball team, 1977–99
— Terry Pettit

“John Cook has accomplished nearly everything a volleyball coach can achieve. He has done this not by focusing just on recruiting great players or the physical skills of his players. In Dream Like a Champion John reveals his relentless quest for better team chemistry, improving communication skills, proper goal setting, and attention to detail—which together result in peak performance.”—Tom Osborne, former Husker head football coach, University of Nebraska athletic director, and U.S. congressman
— Tom Osborne

“Courage is the word that comes to mind when I think of Coach John Cook. Over the years I’ve seen John continually show courage, but never more than when he acknowledged his need to reinvent himself and manage stress. His willingness to share that about himself and to be open to others is one of the most courageous things I’ve seen done by a coach, or by anyone, really, in all my years as a sports psychiatrist.”—Larry Widman, co-founder of Performance Mountain
— Larry Widman

"If you're a Nebraska volleyball fan you should own this book."—Jon Johnston, Corn Nation blog
— Jon Johnston

"For all coaches and people who bleed Husker red, this a great read. . . . Cook admires the special qualities that can come from a small-town Nebraska athlete; other coaches across the state have taken notice, too. These athletes are generally family oriented, hardworking, and possess good qualities that help lead to championship cultures. That's the Nebraska way, and John Cook reveals how he understands the value these athletes can bring to his program."—Nicole Venditte, Great Plains Quarterly
— Nicole Venditte

“John Cook had an unconventional path into coaching. He has incredible insight into building champions on and off the court. His growth mind-set and ability to constantly develop new leadership skills make him a special breed of coach.”—Jack Riggins, co-founder of Performance Mountain, retired U.S. Navy SEAL, and assistant football coach at Midland University
— Jack Riggins