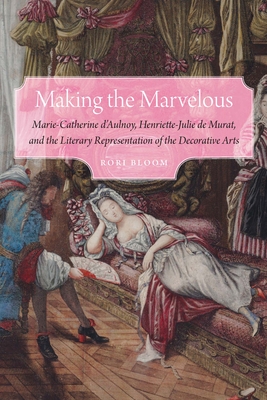 At a moment when France was coming to new prominence in the production of furniture and fashion, the fairy tales of Marie-Catherine d’Aulnoy (1652–1705) and Henriette-Julie de Murat (1670–1716) gave pride of place to richly detailed descriptions of palaces, gardens, clothing, and toys. Through close readings of these authors’ descriptive prose, Rori Bloom shows how these practitioners of a supposedly minor genre made a major contribution as chroniclers and critics of the decorative arts in Old Regime France. Identifying these authors’ embrace of the pretty and the playful as a response to a frequent critique of fairy tales as childish and feminine, Making the Marvelous demonstrates their integration of artisan’s work, child’s play, and the lady’s toilette into a complex vision of creativity. D’Aulnoy and Murat changed the stakes of the fairy tale, Bloom argues: instead of inviting their readers to marvel at the magic that changes rags to riches, they enjoined them to acknowledge the skill that transforms raw materials into beautiful works of art.


Rori Bloom is an associate professor of French at the University of Florida. She is the author of Man of Quality, Man of Letters: The Abbé Prévost between Novel and Newspaper.

“Clearly argued, carefully crafted, and finely detailed, this book is a real gem. It offers a fresh look at the works of d’Aulnoy and Murat by highlighting their embrace of ornament and artful materiality and brilliantly demonstrates the modernity and sophistication of their writing.”—Volker Schröder, associate professor of French at Princeton University

“Rori Bloom’s fascinating new approach to reading d’Aulnoy’s and Murat’s fiction focuses on descriptions and shows that the craftsmanship in the decorative arts informs the marvelous and functions as an analogy between the visual arts and the authors’ own verbal craft.”—Charlotte Trinquet du Lys, associate professor of French and affiliate professor of women and gender studies and medieval and Renaissance studies at the University of Central Florida

“Compelling. . . . By focusing on the artistic processes at work (as opposed to simply the finished product) and how d’Aulnoy and Murat shape their fairy tales as art—as fashionable accessories—Making the Marvelous sheds new light on the early modern fairy tales penned by women.”—Anne E. Duggan, author of Salonnières, Furies, and Fairies: The Politics of Gender and Cultural Change in Absolutist France