The St. Louis Commune of 1877: Communism in the Heartland (Paperback) 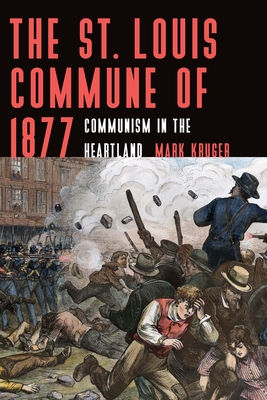 The St. Louis Commune of 1877: Communism in the Heartland (Paperback)


Available in Warehouse. Wait for Email Confirmation for ETA
Following the Civil War, large corporations emerged in the United States and became intent on maximizing their power and profits at all costs. Political corruption permeated American society as those corporate entities grew and spread across the country, leaving bribery and exploitation in their wake. This alliance between corporate America and the political class came to a screeching halt during the Great Railroad Strike of 1877, when the U.S. workers in the railroad, mining, canal, and manufacturing industries called a general strike against monopoly capitalism and brought the country to an economic standstill.

In The St. Louis Commune of 1877 Mark Kruger tells the riveting story of how workers assumed political control in St. Louis, Missouri. Kruger examines the roots of the St. Louis Commune—focusing on the 1848 German revolution, the Paris Commune, and the First International. Not only was 1877 the first instance of a general strike in U.S. history; it was also the first time workers took control of a major American city and the first time a city was ruled by a communist party.
Mark Kruger has previously taught at several universities, including Saint Louis University, where he was the director of the Criminal Justice Organization program. He is retired and lives in St. Louis.
"Mark Kruger has masterfully unearthed an episode of labor history which the ruling class had buried and tried to permanently erase. . . . This is a book well worth reading."—Bob Bonner, Marxism-Leninism Today

"This look into an early demonstration of the American communist and labor movements not only fills a gap in the existing literature, but also provides a riveting story of greed, corruption, and the rebellion of the working class in America. Kruger thoroughly accounts for the factors that precipitated the St. Louis Commune of 1877."—Meredith C. Busch, Western Historical Quarterly

"Kruger's book has valuable lessons. It should find a working class audience at a time when socialism's popularity is on the rise."—Douglas Lyons, wsws.org

"Researchers interested in the early socialist movements in the United States and around the globe should particularly find this work informative, being the first book on the subject in over half a century. It should also appeal to the casual reader who appreciates a good historical study."—Steven Cox, Nebraska History

“The stirring story of St. Louis’s 1877 general strike, in which workers came to rule a city by withdrawing their labor, deserves telling and retelling.”—David Roediger, author of The Sinking Middle Class: A Political History

“A marvelous [look at] a crucial moment in American history. Mark Kruger has captured the drama and context of the forgotten uprising of working people as the close of Radical Reconstruction ended the ongoing social transformation that W. E. B. Du Bois would describe as the finest moment of interracial democracy in the nineteenth century.”—Paul Buhle, author of Marxism in the United States: Remapping the History of the American Left

“There are lessons to be learned from this book that are as relevant today as they were when, for a brief, shining moment, American workers took control of a major city and in so doing improved their lives and the lives of generations to come.”—Michael Wallis, author of The Best Land under Heaven: The Donner Party and the Age of Manifest Destiny

“The St. Louis Commune of 1877 provides a rich and riveting description of a working class uprising in nineteenth-century America. . . . Dreams of social justice combined with crushing poverty and brutal police repression created an explosive revolutionary mix. It’s a history with obvious relevance for the present.”—Warren Rosenblum, professor of history at Webster University, St. Louis

“Mark Kruger’s new book places the events in East St. Louis, Illinois, that precipitated a general strike in St. Louis in their true historical and transnational context. . . . A truly original and pathbreaking study.”—Melvyn Dubofsky, coauthor of Labor in America: A History

“We can’t begin to solve our current problems if we don’t understand the class nature of this society and the world. In the American Midwest, in the nineteenth century, ordinary workers who were also intellectuals and revolutionaries met the crisis of their times with imagination, solidarity, and courage. They were soundly defeated, alas. Why was this history, finally uncovered by Mark Kruger, buried for almost 150 years? The Masters of the Universe don’t want us to know that workers fought back.”—Mark Rudd, author of Underground: My Life with SDS and the Weathermen