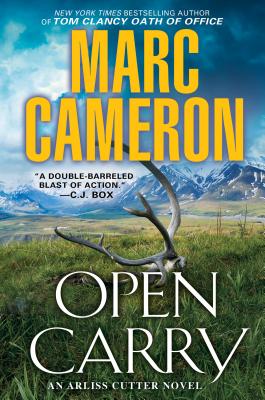 This is book number 1 in the An Arliss Cutter Novel series.

Law enforcement veteran Marc Cameron brings an explosive authenticity to this powerful new U.S. Marshal series. Arliss Cutter is a hero for our times. And his hunt for justice cuts straight to the bone. . . .

U.S. Marshal Arliss Cutter is a born tracker. Raised in the Florida swamplands, he honed his skills in the military, fought in the Middle East, and worked three field positions for Marshal Services. When it comes to tracking someone down—or taking someone out—Cutter’s the best. But his newest assignment is taking him out of his comfort zone to southeast Alaska. Cold, dark, uninhabited forests often shrouded in fog. And it’s the kind of case that makes his blood run cold . . . the shocking murder of a Tlingit Indian girl.

But the murder is just the beginning. Now, three people have disappeared on Prince of Wales Island. Two are crew members of the reality TV show, Fishwives. Cutter’s job is to find the bodies, examine the crew’s footage for clues, and track down the men who killed them. But it won’t be easy, because the whole town is hiding secrets, every trail is a dead end—and the hunter becomes the hunted . . .
Marc Cameron, a native of Texas, has spent over twenty-nine years in law enforcement. His assignments have taken him from rural Alaska to Manhattan, from Canada to Mexico and points in between. A second degree black belt in jujitsu, he often teaches defensive tactics to other law enforcement agencies and civilian groups. Cameron presently lives in Alaska with his wife and his BMW motorcycle.
Praise for OPEN CARRY

“A double-barreled blast of action, narrative, and impossible-to-fake authenticity with a great sense of place and a terrific protagonist.  I’m looking forward to many more Arliss Cutter thrillers.”
—C.J. Box, #1 New York Times bestselling author of The Disappeared

“A  terrific new series…Open Carry reads like a cross between Lee Child’s The Killing Floor and C.J. Box’s Blood Trail…and is perfect for fans of both. Cameron, a natural storyteller, brings the Alaskan wilderness to life.”
—The Real Book Spy

“Cameron effectively combines investigation and straight-ahead action, and he has fashioned a compelling, never-give-an-inch hero who will appeal to Jack Reacher fans. Jump in now for what looks to be a series that thriller fans will follow closely. “
—Booklist

Praise for Marc Cameron and his bestselling novels

“Cameron delivers plenty of action that Tom Clancy fans have always loved. . . . Cameron’s performance puts him at the head of the pack.” —Publishers Weekly on Tom Clancy Power and Empire

“Cameron keeps the action happening at a breakneck pace, yet he imbues the story with a sense of authenticity that’s the product of spending over twenty-five years in law enforcement, much of it on the federal level.”—Suspense Magazine on Field of Fire

“With vivid locations and descriptions, a plot that moves at breakneck speeds, and more than enough action to keep your adrenaline pumping throughout, Field of Fire is Marc Cameron’s best novel yet.”—The Real Book Spy.com

“A real thriller not for the faint at heart.”
—Goodreads on State of Emergency