Presto!: How I Made Over 100 Pounds Disappear and Other Magical Tales (Paperback) 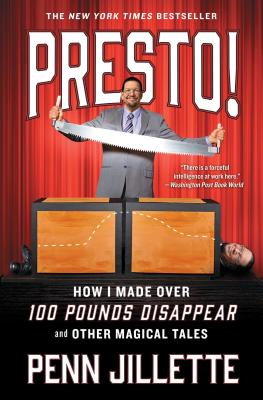 Presto!: How I Made Over 100 Pounds Disappear and Other Magical Tales (Paperback)


Available in Warehouse. Wait for Email Confirmation for ETA
Penn Jillette’s New York Times bestselling account of his “extremely funny and somewhat profane journey to discovering a healthy lifestyle…that will motivate others to seek weight-loss solutions” (The Washington Post).

In Presto, Jillette takes us along on his journey from skepticism to the inspiring, life-changing momentum that transformed the magician’s body and mind. He describes the process in hilarious detail, as he performs his Las Vegas show, takes meetings with Hollywood executives, hangs out with his celebrity friends and fellow eccentric performers, all while remaining a dedicated husband and father. Throughout, he weaves in his views on sex, religion, and pop culture, making his story a refreshing, genre-busting account. Outspoken, frank, and bitingly clever, Presto is an incisive, rollicking read. In the end, it is “undeniably inspiring” (Booklist).
Penn Jillette is a cultural phenomenon as a solo personality and as half of the world-famous Emmy Award­-winning magic duo Penn & Teller. His solo exposure is enormous: from Howard Stern to Glenn Beck to the Op-Ed pages of The New York Times, The Wall Street Journal, and the Los Angeles Times. He has appeared on Dancing with the Stars, MTV Cribs, and Chelsea Lately and hosted the NBC game show Identity. As part of Penn & Teller, he has appeared more than twenty times on David Letterman, as well as on several other TV shows, from The Simpsons and Friends to Top Chef and The View. He cohosts the controversial series Penn & Teller: Bullshit!, which has been nominated for sixteen Emmy Awards. He is currently cohost of the Discovery Channel's Penn & Teller Tell a Lie and the author of God, No! and Presto.