The Microgenre: A Quick Look at Small Culture (Paperback) 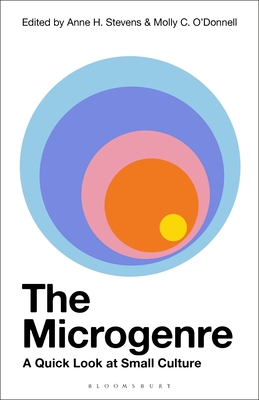 The Microgenre: A Quick Look at Small Culture (Paperback)

Everybody knows, and maybe even loves, a microgenre. Plague romances and mommy memoirs. Nudie-cutie movies, Nazi zombies, and dinosaur erotica. Baby burlesks, Minecraft fiction, grindcore, premature ejaculation poetry...microgenres come in all varieties and turn up in every form of media under the sun, tailor-made for enthusiasts of all walks of life.

Coming into use in the last decade or so, the term microgenre classifies increasingly niche-marketed worlds in popular music, fiction, television, and the Internet. Netflix has recently highlighted our fascination with the ultra-niche genre with hilariously specific classifications -- "independent supernatural dramedy featuring a strong female lead" - that can sometimes hit a little too close to home. Each contribution in this collection introduces readers to a different microgenre, drawn from a range of historical periods and from a variety of media. The Microgenre presents a previously untreated point of cultural curiosity, revealing the profound truth that humanity's desire to classify is often only matched by the unsustainability of the obscure and hyper-specific. It also affirms, in colorful detail, what most people suspect but have trouble fathoming in an increasingly homogenized and commercial West: that imaginative projects are just that, imaginative, diverse, and sometimes completely and hilariously inexplicable.
Molly C. O'Donnell is an instructor in the Department of English at James Madison University, USA. She was the recipient of the Gaskell Journal Joan Leach Memorial Prize (2016), and her work has appeared in publications like Victoriographies and The Norton Introduction to Literature, 11th ed. (2013). Anne H. Stevens is the author of British Historical Fiction before Scott (2010) and Literary Theory and Criticism: An Introduction (2015). She is chair of Interdisciplinary, Gender, and Ethnic Studies and Professor of English at the University of Nevada, Las Vegas, USA.