Beyond Critique: Contemporary Art in Theory, Practice, and Instruction (Paperback) 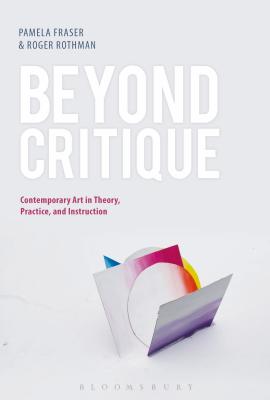 Beyond Critique: Contemporary Art in Theory, Practice, and Instruction (Paperback)

Critique has long been a central concept within art practice and theory. Since the emergence of Conceptual Art, artists have been expected by critics, curators, and art school faculty to focus their work on exposing and debunking ideologies of power and domination. Recently, however, the effectiveness of cultural critique has come into question. The appearance of concepts such as the "speculative," the "reparative," and the "constructive" suggests an emerging postcritical paradigm.

Beyond Critique takes stock of the current discourse around this issue. With some calling for a renewed criticality and others rejecting the model entirely, the book's contributors explore a variety of new and recently reclaimed criteria for contemporary art and its pedagogy. Some propose turning toward affect and affirmation; others seek to reclaim such allegedly discredited concepts as intimacy, tenderness, and spirituality. With contributions from artists, critics, curators and historians, this book provides new ways of thinking about the historical role of critique while also exploring a wide range of alternative methods and aspirations. Beyond Critique will be a crucial tool for students and instructors who are seeking to think and work beyond the critical.
Pamela Fraser is an artist and an Associate Professor at The University of Vermont, USA, whose work has been exhibited internationally since 1996. Roger Rothman is the Samuel H. Kress Professor of Art History at Bucknell University, USA. He has published articles on Cubism, Dada, and Surrealism, and is the author of Tiny Surrealism: Salvador Dali and the Aesthetics of the Small (2012).