Divided Allies: Strategic Cooperation Against the Communist Threat in the Asia-Pacific During the Early Cold War (Hardcover) 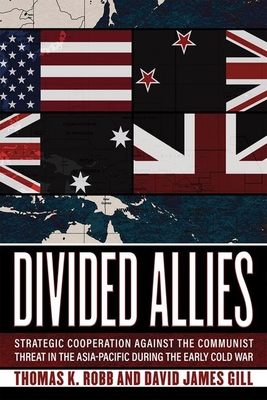 Divided Allies: Strategic Cooperation Against the Communist Threat in the Asia-Pacific During the Early Cold War (Hardcover)

By directly challenging existing accounts of post-World War II relations among the United States of America, the United Kingdom, Australia, and New Zealand, Divided Allies is a significant contribution to transnational and diplomatic history. At its heart, Divided Allies examines why strategic cooperation among these closely allied Western powers in the Asia-Pacific region was limited during the early Cold War. Thomas K. Robb and David James Gill probe the difficulties of security cooperation as the leadership of these four states balanced intramural competition with the need to develop a common strategy against the Soviet Union and the new communist power, the People's Republic of China.

Robb and Gill expose contention and disorganization among non-communist allies in the early phase of containment strategy in Asia-Pacific. In particular, the authors note the significance of economic, racial, and cultural elements to planning for regional security and they highlight how these domestic matters resulted in international disorganization. Divided Allies shows that, amidst these contentious relations, the antipodean powers Australia and New Zealand occupied an important role in the region and successfully utilized quadrilateral diplomacy to advance their own national interests, such as the crafting of the 1951 ANZUS collective security treaty.

As fractious as were allied relations in the early days of NATO, Robb and Gill demonstrate that the post-World War II Asia-Pacific was as contentious, and that Britain and the commonwealth nations were necessary partners in the development of early global Cold War strategy.

Thomas K. Robb is Senior Lecturer at Oxford Brookes University and a Fellow of the Royal Historical Society. He is author of Jimmy Carter and the Anglo-American Special Relationship and A Strained Partnership? David James Gill is Associate Professor at the University of Nottingham. He is author of Britain and the Bomb.