The Politics of Manufactured Outrage: Hypocrisy in Action (Paperback) 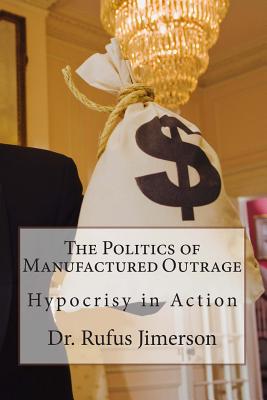 By Rufus Jimerson
$48.00
Usually Ships in 1-5 Days
This book cannot be returned, cancelled, or exchanged.

The purpose of this book is to uncover the historic rhetoric and manufactured outrage undermining the leadership of the nation's first African-American president. A strong case is made that the extreme rhetoric and outrage that has obstructed the president's initiatives and efforts to bring the nation together is driven by racial animus. Some of the manufactured rhetoric and outrage is indeed driven by partisan politics as the Republican Party moved further to the far right of the American people. The ensuing demonization of President Obama is driven by the conservative echo chamber led by Fox News and right-wing radio. Sponsors include conservative political action groups and their mega donors. Besides obstructing the President's initiatives, they have effectively lowered his popularity and belief that he can competently handle the job. This outcome aligns with social expectations that blacks are intellectually inferior and less competent. The outrage and its extreme rhetoric are driven by money made from sponsors and mega donors. Greed and self-serving opportunism are the underlining values that dictate the motives of these conservatives and their surrogates. Manufactured outrage from their point of view generates money to subsidize their lifestyles and luxuries, herein. Besides the President, Pope Francis the leading proponent of Jesus' message is a target of their money-driven outrage that favors wealthy mega donors. In the alternate universe that is shared with the manufactured outrage machine, its enablers, Republican conservatives, sponsors and wealthy mega donors, facts do not matter. Benghazi, Fast and Furious, unsubstantiated allegations that Obama and his policies align with the Muslim Brotherhood and Socialism stand as national priorities. These right-wingers use propaganda as media. Unfortunately, mainstream media has unquestionably accepted the propaganda as a legitimate view equivalent to facts. The propaganda perpetuated by the outrage machine has facilitated the jailing, suppression or censorship of critics. Citizens, particularly minorities, have become monolithic opponents of a militarized state and local government in support of homeland security. Apparently, the manufactured outrage is used to heighten racial fears and anxieties. Respectively, it is used to further the privilege enjoyed by wealthy whites over underprivileged minorities. Tension produced is used to reinforce ethnocentrism and white hegemony. The Republican Party benefits by attracting rural and Southern whites. These demographics reinforce white hegemony and intolerance toward people of color. In the midst of the War on People of Color, the Republican Party motivated by the Tea Party and the conservative outrage machine launched a War on Labor, the Middle Class and the Poor. In doing so, they have drawn unprecedented campaign contributions from their wealthy donors. The Koch Brothers' network led the mega donors in this endeavor funding think tanks, political action committees and surrogates holding political office and the ear of media listeners. The target is to eliminate as much of the safety net, workers' rights, and other programs designed to elevate the least amongst us, working poor and middle class. President Obama as the head of the Democratic Party that defends the safety net, workers' rights, and social mobility for the poor, minorities and middle class, he is targeted by the right-wing outrage machine. In the endeavor to mischaracterize him, the outrage machine has fabricated more than eighteen myths that have been debunked. The myths are debunked and the facts are clarified. The outrage machine has come to the defense of racism toward President Obama and African-Americans serving in his cabinet. In contrast, they have defended high profile racist named in reinforcing the bigoted elements in their base and listening audience. A surge in racial segregation and intolerance has emerged. Jim Crow politics has reached a new.