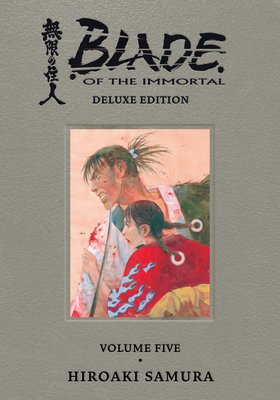 
Available in Warehouse. Wait for Email Confirmation for ETA
Over 700 pages of samurai swordplay and grudge matches in one killer, value-priced collection, featuring Hiroaki Samura’s fast-paced “Mirror of the Soul,” “Last Blood,” and “Trickster” story arcs!

Kidnapped and bound by three Itto-ryu warriors, Rin is unable to warn her bodyguard, Manji—the seemingly immortal swordsman, that he’s heading into a trap. The Itto-ryu thugs also possess a large dose of the only known poison to damage Manji’s blood and severely cripple his regenerative abilities. And is the Mugai-ryu assassin Giichi following Manji in order to help rescue Rin . . . or will he just stick around long enough to finish off any survivors?

Collects Blade of the Immortal volumes 13 to 15 in the original 7x10 serialized format, in a faux-leather hardcover treatment, and with a bookmark ribbon.

Hiroaki Samura is a Japanese writer/illustrator and creator of Blade of the Immortal, as well as several other short works. He has also done various illustrations for magazines.
“Samura's stark black-and-white drawings combine precision and a gritty, gestural line in riveting, powerfully expressive illustrations . . . Readers will be drawn into this epic tale, even when there are moments they would prefer to look away.”—Publishers Weekly

“Few artists draw samurai manga as well as Hiroaki Samura, whose pages are packed with photorealistic detail while remaining fluid, dynamic, and human.”—OtakuUSA