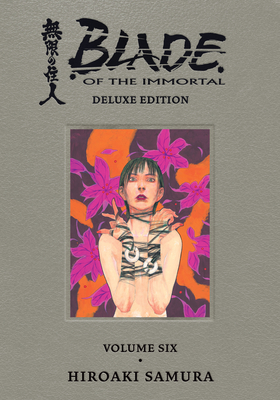 
Available in Warehouse. Wait for Email Confirmation for ETA
Over 800 pages of gripping samurai action and tension! With Hiroaki Samura’s titanic tale hitting its midpoint, Rin begins to discover her skills as a warrior and strategist, as she makes new allies and resolves to find the missing Manji.

Her immortal swordsman is imprisoned and being tortured in an underground stronghold beneath Edo Castle where cruel doctors hope to find the secret behind his mystical powers. Rin teams up with the enigmatic Doa to not only free Manji, but expose the hideous medical experiments.

Collects Blade of the Immortal volumes 16 to 19 in the original 7x10 serialized format, in a faux-leather hardcover treatment, and with a bookmark ribbon.

Hiroaki Samura is a Japanese writer/illustrator and creator of Blade of the Immortal, as well as several other short works. He has also done various illustrations for magazines.
“Samura's stark black-and-white drawings combine precision and a gritty, gestural line in riveting, powerfully expressive illustrations . . . Readers will be drawn into this epic tale, even when there are moments they would prefer to look away.”—Publishers Weekly

“Few artists draw samurai manga as well as Hiroaki Samura, whose pages are packed with photorealistic detail while remaining fluid, dynamic, and human.”—OtakuUSA