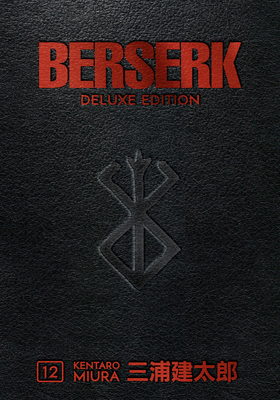 Griffith's new Band of the Hawk assume their unholy forms to battle the monstrous Kushan emperor and his horde of demons, leaving the terrified Midland citizenry to wonder if their rescuers are another horrific curse. Meanwhile, Guts and his companions seek refuge to repair their ship on a small island that is not the safe haven they'd hoped for—it's a sinister place watched over by an ancient, vengeful god whose power is about to be unleashed!

While attending college at Nihon University, in 1988, Kentaro Miura debuted a 48-page manga known as Berserk Prototype, an introduction to the current Berserk fantasy world. It went on to win Miura a prize from the Comi Manga School. In 1989, after receiving a doctorate degree, Kentarou started a project titled King of Wolves based on a script by Buronson, writer of Hokuto no Ken (Fist Of The North Star).

The series has also spawned a whole host of merchandise, both official and fan made, ranging from statues and action figures, to key rings, video games, and a trading card game. In 2002, Kentaro Miura received the second place in the Tezuka Osamu (Astro Boy) Cultural Prize of Excellence for Berserk.