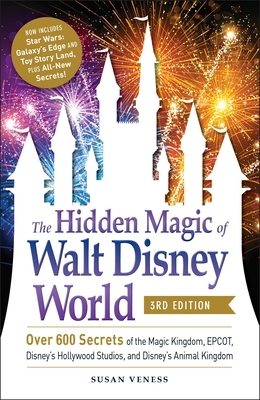 
Available in Warehouse. Wait for Email Confirmation for ETA
The latest edition to the successful Hidden Magic series features updated information on the latest attractions at Walt Disney World, including Star Wars: Galaxy’s Edge and Mickey and Minnie’s Runaway Railway!

Whether it’s your first or fiftieth visit to Walt Disney World, you’ll be surprised at how much you can miss during your trip. But with this guide to Disney’s hidden treasures you’ll learn:
-You can search for more than the usual hidden Mickey. There are other beloved characters like Donald Duck and Minnie Mouse hidden around the parks.
-The book Belle reads in Beauty and the Beast is a real book...and you can find out what it is by heading to Maurice’s cottage.
-Imagineers hide symbols of themselves around the park to “sign” their work.

Including all-new information on Toy Story Land, Star Wars: Galaxy’s Edge, and Mickey and Minnie’s Runaway Railway, The Hidden Magic of Walt Disney World, 3rd Edition will inspire you to relive the magic year after year!
Susan Veness is an international travel writer, researcher, online content provider, and itinerary planner specializing in Florida, Disney, Orlando’s theme parks, and cruising. She is the author of four books in The Hidden Magic of Walt Disney World series, and coauthor of The Brit Guide to Orlando and the biography Defying Expectations. She has been visiting Walt Disney World since it opened in 1971 and with a home just minutes from the Mouse, she continues to tour the parks on a regular basis.
“May just boggle your mind.”

“Like having a tour guide in your back pocket.”